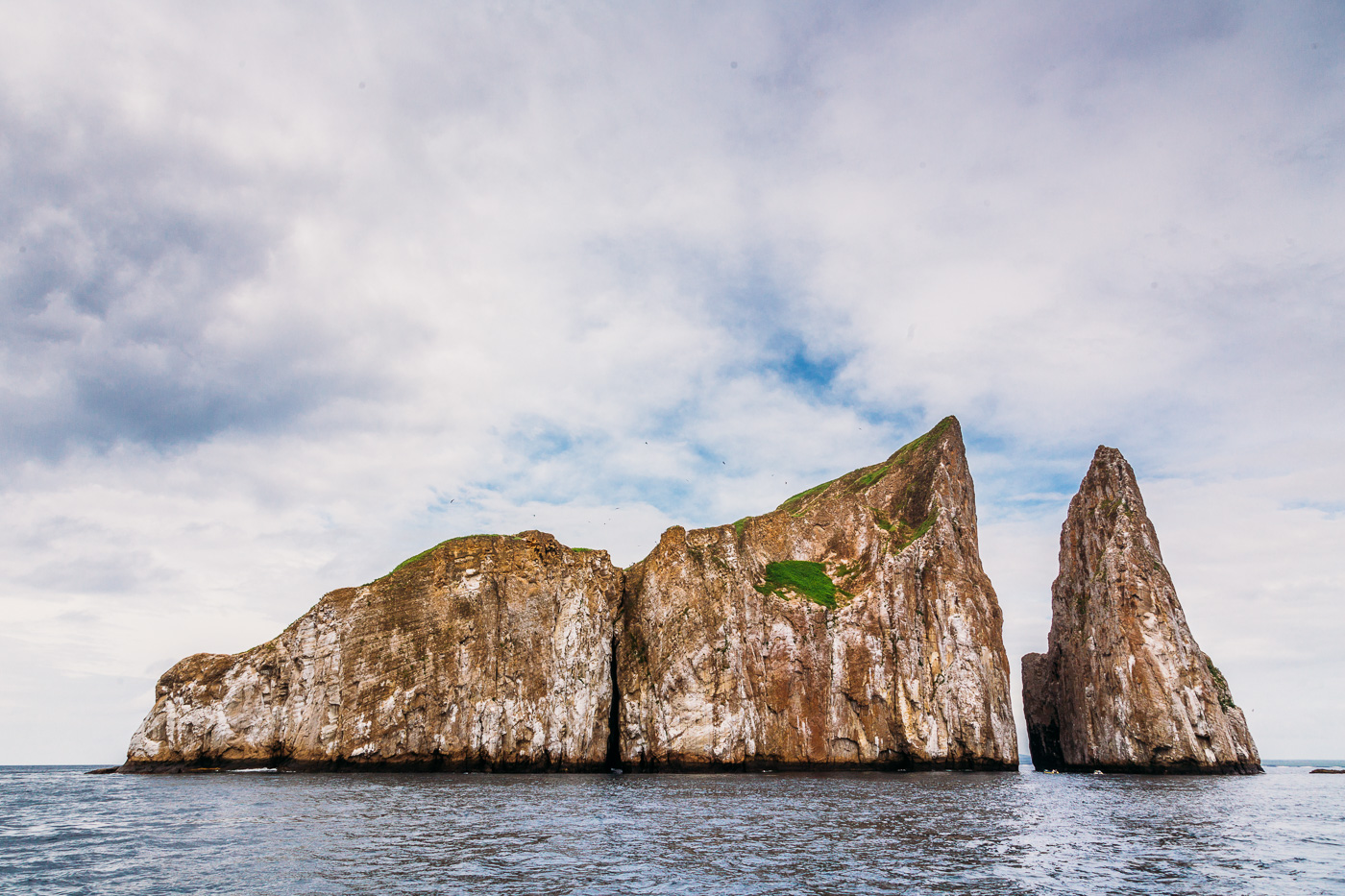 Without fail when we would ask guides and tour operators “Where’s the best place to snorkel in the Galapagos?” we always received the same response – Kicker Rock. With only the weekend left on Isla San Cristobal before returning to the mainland, we were lucky to be able to book a last minute excursion to Kicker Rock. The weekends in South America have proven a difficult time to do much of anything with many tour operators closing shop or running fewer trips. So we were thrilled that Sunday to be able to catch a ride with a scuba diving outfitter to snorkel with the sharks at Kicker Rock.

Our boat was meant to depart that morning around 8:30am but it took some time before the crew had loaded and checked up all of the diving equipment. We were voyaging to Kicker Rock on a catamaran, which we had been told was a smoother ride than other cruise ships although it would take us a bit longer to get there.

We were so distracted listening to the instructions and watching the preparations of the divers that we barely noticed how much time had passed. An hour and a half later, the iconic protruding rocks of Leon Dormido loomed large on the horizon. SHARK SNORKELING IN THE DEEP BLUE

The Kicker Rock that exists today is all that remains of a submerged volcanic cone, eroded over thousands of years by the sea. Towering above the water at over 500 feet, Kicker Rock is now home to a number of animal species both above and below water. Most exciting for us, and the reason we were there, was to see white-tip reef sharks, spotted eagle rays, the Galapagos sharks and, if we were extremely lucky, hammerheads.

Our first snorkel adventure was to cross through the channel between the rocks. This channel, reaching all the way to the ocean floor 130 feet below, had been formed by natural erosion and today serves as an ideal habitat for marine life to swim.

We jumped into the water after the scuba divers to allow them time to descend to the ocean floor. Then our small group of four snorkelers followed them in. With one look through our masks into the water below, it became apparent just how deep the water was. At times the ocean floor was barely visible through the murky aquamarine blue water.

As we made our way through the channel we could see schools of pelagic fish, white-tip reef sharks and Galapagos sharks swimming cooly and slowly in the depths far below. In all there were more than a hundred sharks swimming beneath us. For the most part they stayed relatively close to the ocean floor granting us snorkelers a beautiful birds eye view. (That was until they started to be chased away by the divers, driving them slightly closer to us at the water’s surface.) For our second snorkel drop we swam around the perimeter of Leon Dormido, scaling its great vertical walls. Here the schools of sharks were replaced with dozens of small sea turtles. Through the deep, dark, murky water we could see at least one sea turtle dashing this way or that at any given time.

Though much faster than us to maneuver the strong currents surrounding Kicker Rock, the sea turtles were gentle and patient and let us swim quite close in proximity before propelling their way past us to their next destination. Although we had ventured to Kicker Rock with the express purpose of seeing sharks, we were once again thrilled with the beautiful experience we had swimming for 30 minutes with the sea turtles. Once we were all safely back aboard the catamaran, drying out our pruned fingers from the morning’s snorkel, we were regaled with the divers’ stories of witnessing a school of hammerhead sharks swim gracefully by (pictured above). This experience, more than any other, solidified our desire to get scuba or free dive certified (and soon). To be so close to the action but confined to the surface of the water when there was so much happening below was torture. To end the day’s excursion, we wet landed on Playa Lobos beach allowing us time to explore and relax before heading back to Puerto Baquerizo Moreno. Duration: 7 hours including 1.5 hours of snorkeling