Scuba Diving The Most Beautiful Island In the World 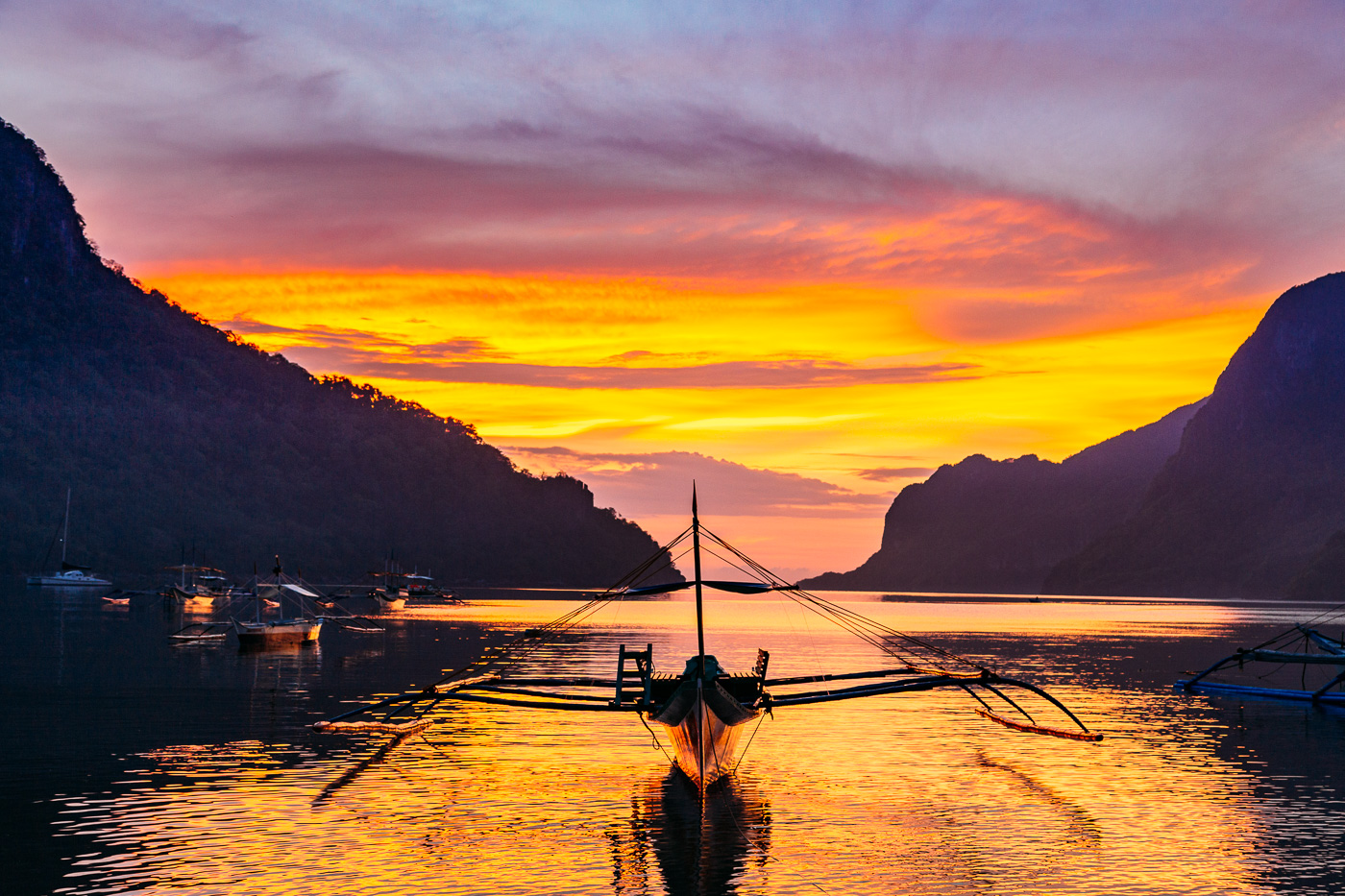 Of the more than 100,000 islands dotting this big blue earth, the award for Most Beautiful Island in the World goes to Palawan, Philippines for a second year running. The long sparsely-populated islet is a fantasyland of rugged fishing villages, remote white sand beaches and jagged limestone lagoons that are sure to mesmerize from any vantage point. But Palawan is nothing if not for its aqua marine waters. So, you may ask, what is Palawan like beneath the sea? This was certainly the question we aimed to answer during our recent visit to the Philippines. We headed to the island’s paradise headquarters – the small town of El Nido located in idyllic Bacuit Bay – to investigate. With the help of Palawan Divers, here’s what we found out about scuba diving El Nido on the most beautiful island in the world. Why Should I Visit El Nido, Palawan?

Palawan remains moderately difficult to reach compared to other island clusters in the Philippines. For that reason, many tourists on shorter holiday leave it off their itinerary altogether. This works out better for those who do put in the work to get here. We almost made this mistake ourselves as travel in the Philippines is long and hard. However, as it always goes, we met a pair of travelers who had just come from Palawan and couldn’t stop talking about how charming it was. So we booked our Cebu Pacific flights and headed to El Nido to check it out.

If you visit Palawan, then a stopover in El Nido is a prerequisite. But know that the town of El Nido is a few years past being the undiscovered paradise it once was. Noisy trikes compete with wandering tourists and food vendors for space on its cluttered and chaotic streets. Even the Bay was overrun with banga boats. That said, El Nido is the jumping off point for the ever-popular “A, B, C & D” island hopping tours. It is also home to some pretty fantastic dive sites, as we would experience with Palawan Divers.

The town of El Nido maintains a laid back vibe and nice white sandy beach around which tourism is centered. We ended everyday with a mango smoothie on the beach as we watched the sunset over Bacuit Bay. They were truly some of the most vibrant sunsets we have ever seen.

There are a wide range of accommodations in El Nido but even the cheap ones tended to be more expensive than what we found elsewhere in the Philippines. Food was also a bit more expensive, especially at the touristy restaurants on the beach, but you have a great range of options and good quality. What’s the Scuba Diving Like on El Nido, Palawan?

If you were to look at the list of diving hot spots in the Philippines, El Nido generally isn’t at the top of it. (Think Coron, Apo Island and Balicasag.) But we’re not exactly sure why that is.

El Nido is a great place to dive because its sites are accessible to all kinds of divers, from tunnels and deep dive sites to walls and drifts. Whether you are an experienced diver or a beginner, everyone can find dive sites to have fun in El Nido. And if you are traveling with people who don’t like to dive, they can spend their day relaxing and snorkeling on a remote bay and or take a turn at free diving instead.

Another perk of diving El Nido is that the orientation of Bacuit Bay protects most dive sites from the strong ocean currents. For that reason, you avoid the winds and waves that can come with open ocean dives.

Finally, there is a large diving community based in El Nido so it is easy to find instructors and fellow dive lovers from all over the world who share your passion and enthusiasm for life under the sea. There are over 30 dive sites reachable from El Nido so if you have the time to spare, you could spend weeks here without ever diving the same site twice. We visited three different sites during our day of El Nido scuba diving: South Miniloc, Paglugaban, and Nat-Nat.

The most challenging and rewarding dive site for us was South Miniloc, which was discovered by diving great Jacques Cousteau in the 1970’s. We encountered a ferocious current (strongest we’ve ever dove in) which nearly kept us from reaching the dive site’s real treasure – a field of cabbage corals covered in yellow snappers and silver tunas. It was an absolutely surreal moment once we finally reached the field of coral and were able to stop kicking and let the current take us up and over as we floated through the schools of colorful dancing fish around us. Our excellent dive guide, Nhoy, also spotted pufferfish, painted frogfish, common grouper and hawksbill turtles at South Miniloc.

At the second dive site of the day, Paglugaban, we were all about our macro sitings. Nudibranches were the real stars of the show here: chromodoris willani, coi teticulata, and magnifica as well as hypselodoris, cuthona and a gorgeous oriental carpet flatworm. We were so enthralled with locating our next nudi, we barely noticed the snapping eels lurking from their hiding places beneath the rocks.

We ended our day of diving at Nat-Nat where we had the good fortune to run into a large blue-spotted stingray at the beginning of our dive. From a distance we also enjoyed watching chevron barracudas swim their rounds while cuttlefish and families of squid pulsated away at the first sight of our presence. We found more exotic flatworms to get excited about. And one lone bumphead parrotfish (like those we saw at the USAT Liberty Wreck Dive) evaded Adam who was too busy photographing weird, unidentifiable black and white nudibranches. What Will You See While Diving El Nido?

As a Managed Resource Projected Area, El Nido has done a good job of preserving its high biodiversity of marine life, including 450 species of coral, 900 species of fish and 1,700 species of crustaceans and nudibraches. This also means you pay a small eco-tourism development fee (ETDF) of 200PHP as a part of your tourism activities.

While scuba diving El Nido, you will have the opportunity to see both macro life and large pelagic fish, including blue spotted stingray, parrot fish, sea horse, barracudas, silver tunas, moray eels, cuttlefish, squid and schools of yellow snapper, silver tuna, bigeye scads and black jacks. The chance even exists to encounter one of the five species of sea turtles, sea cows (dugongs), whale sharks, manta rays and dolphins if you are lucky. In short, there are plenty of beautiful surprises waiting to be discovered under the sea. There are more than a dozen different dive shops now operating out of El Nido so you have plenty of choices. In the end, we went with Palawan Divers. First, they sport Adam’s favorite, the happy nemo fish, on their logo which immediately made us like them. Their two office locations in El Nido were inviting and their equipment was in great condition. We also were very happy with the friendliness, professionalism and knowledge of all the staff we interacted with.

For scuba, we dove with dive guide Nhoy who was enthusiastic under the sea and an excellent spot of creatures big and small. We also had the opportunity to try our hand at free diving with Palawan Divers. After completing an introductory one-day course, we wish we had planned to stay at least a two more days in El Nido to complete our beginner free diving certification. If You Go: Scuba Diving El Nido on Palawan, Philippines

What: El Nido is nestled in a picture-perfect bay of limestone karst outcroppings jutting from the sea. With its rich marine biodiversity, beautiful landscapes and quiet sea conditions, El Nido and Bacuit Bay are perfect for first-time as well as experienced divers. Underwater scenes include 50 meter wall dives, gentle sloping sandy bottoms and everything in between. For those learning to dive the reefs and shallow waters are protected from currents and waves. And experienced divers will love the incredible array of macro life.

Where: El Nido is set on the emerald northwest coast of north Palawan Island in the Philippines.

When: You can scuba dive El Nido year round, but sites are especially pleasant from October to May when the waters are calm.

How: Palawan Divers is located on the main road in El Nido town. The most popular way to reach El Nido is to fly into Puerto Princesa in Central Palawan then take a shuttle north to El Nido. Regular flights arrive to Puerto Princesa Airport from Manila and Cebu via Cebu Pacific and AirAsia. Shuttles can be arranged directly at the airport just outside the arrivals terminal. It will take you approximately 6 hours to drive the 220 kilometers to El Nido. Bring snacks and water with you as food options are limited on the road.

If you are arriving south to El Nido from Coron, you can take a boat (1,200PHP) which departs once daily and takes roughly 8 hours (weather and ocean conditions depending). The boat is very basic so bring water and snacks. Also, be prepared to get wet from seaspray as the sides of the boat are exposed to the open ocean.

Cost: We dove three El Nido dive sites with Palawan Divers. Two- and three-dive packages are available including lunch for 3,400PHP and 4,200PHP.