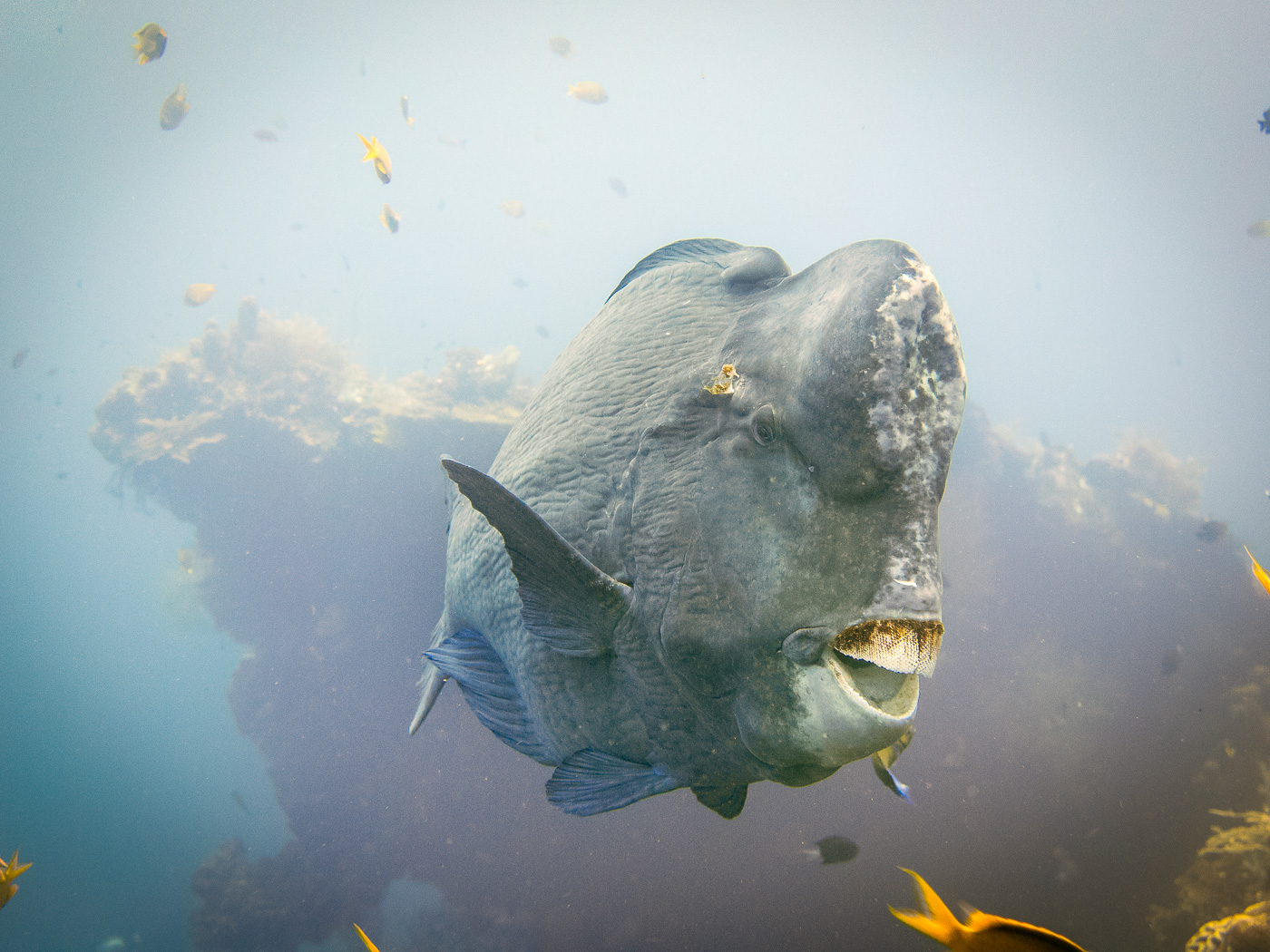 Lying only 30 meters off of Tulamben’s salty black stretch of coastline, the USAT Liberty is possibly more beautiful today than it was when it sailed the high seas some 75 years ago. The wreckage of this torpedoed World War II cargo carrier has since been reclaimed by nature. Its masts and decks are covered in thick corals, twisting and molding harmoniously around the ship’s steel curves. It’s engine room is now the bedroom of a pack of prehistoric looking bumphead parrotfish. It’s deck is the hawksbill sea turtle’s daily playground.

We heard whispers about Bali’s USAT Liberty Wreck Dive while we were pursuing our Open Water Diver Certification on Gili Air. Lucky for us we had the opportunity to dive this incredible wreck site during our two weeks in Bali. Even more lucky for us, it lived up to the hype. Coral Life at The Tulamben Drop-off

To stretch out our sea legs, we spent the first hour of the day diving at the Tulamben Wall, also known as The Drop-Off dive site.  Aptly named so because of its 60 meter (200 foot) vertical, this dive site is home to an array of colorful corals and macro life including large barrel sponges and gorgonian fans.

Our local dive master, Gede, had a keen eye for macro life we never would have been able to spot ourselves. Around every corner, he was discovering something new. Two tiny frogfish blended in with the corals while an ornate ghost pipefish relaxed under the shelter of a rocky enclave. A scorpion rockfish hid in plain sight, his camouflage so excellent I could barely discern his head from the rocks. In a small cove, Gede found cleaning shrimp which he proceeded to put in his mouth (twice!). He said he needed a teeth cleaning but I think he was just showing off. However, the highlight of this dive site was discovering two adult octopus curled up and blending in with the corals. While one retreated from us quickly the other remained allowing us to observe his loose fleshy body pulsate as he turned all colors of the rainbow. The USAT Liberty happens to be one of the most accessible wreck dives in the world positioned a mere 25 meters (82 feet) from the beach with its highest point sitting only five meters below the water’s surface.

Similar to the Tulamben Drop-off, the USAT Liberty Wreck Dive is a beach entry. Unlike the Tulamben Drop-off, however, the USAT Liberty wreck is insanely popular and thus crowded. Pulling up to the beach we could see divers everywhere – entering the water, exiting the water, checking equipment, pulling on wetsuits. And this wasn’t high season. I felt a bit of panic thinking about how many people we would be swimming with below.

We spent our surface interval watching in amazement at the organized chaos before following suit and gearing up for our own beach entry. The large rocky pebbles of the beach tested our skills of balance as we walked our tanks into the water.

Finally far enough off shore with deflators in the ready position, we lowered ourselves into the depths below.  Within seconds of equalizing, we spotted the resident barracuda waiting somewhat nervously nearby. He eyed the divers approaching him for a moment before flashing his teeth and swimming away.

It wasn’t long before we came up on the great hull of the ship. Visibility was not great that day (10 meters, 32 feet) which made those first glimpses of the USAT Liberty all the more ominous and exhilarating. The structure of the ship was still discernible but completely overgrown in healthy soft corals. Numerous structural holes provided opportunity for exploration. Today we would be making a Z formation over and back through. As we floated weightlessly above the main deck of this once great ship, I felt like an explorer on an expedition to discover long-lost treasure. Schools of colorful reef fish swam above and below us mixing with hawksbill turtles, trumpetfish, nudibranch and scorpion fish. Despite how many divers were in the water with me, at times it felt like we were the only ones there. The Bumphead Parrotfish of the USAT Liberty Wreck

However nothing beat watching the bumphead parrotfish glide slowly from one engine room nook to the next cargo hold cranny, all the while flashing their oversized beak-like teeth plates through their far too small fleshy lips. Though not winning any beauty contests, these giant humpheads were such a treat to observe as they noisily crunched away at live corals. Their large green bodies, giant humps and prominent pearly (er, not so pearly) whites made them excellent photo subjects.

But even more remarkable about these magnificent creatures than their looks is the role they play in creating the soft, sandy beaches we all love so much. The humphead chews up and digests live coral, and through the digestion process passes out fine powdery sand. This sand also helps in maintaining the health of reef ecosystems which is why it was so sad to hear of the bumphead parrotfish being fished to extinction in some places. The Making of the USAT Liberty Wreck

The USAT Liberty’s maiden voyage departed from New Jersey in 1918. The 410-foot ship was originally built to transport cavalry horses to the front lines in France during World War I. After the war, the ship was decommissioned for a period before returning to military action in 1940 for World War II. It was in 1942 on a mission carrying supplies from Australia to the Philippines that a Japanese submarine torpedoed the USAT Liberty in the Lombok Strait. Unable to make it back to port, the captain steered the ship onto the beach at Tulamben. And here it sat until 1963 when the neighboring Mount Agung volcano erupted. Its tremors and lava flow pushed the ship off of the beach and into the ocean where it now rests today. How to Get to the USAT Liberty Wreck Dive

The USAT Liberty wreck dive is located off the coast of Tulamben in northeastern Bali. Daily dive trips are most easily organized from Tulamben, or neighboring town Ahmed, although day trips can be arranged from Ubud and Kuta as well. The USAT Liberty is among Bali’s most famous dive sites and certainly it’s most popular, as we can attest after swimming on top of and below scores of other divers as we dodged helms and wove in and out of engine rooms to get a glimpse of the prehistoric looking bumphead parrot fish.

But don’t let the crowds deter you from diving at this awesome site. This is a dive fit for all comfort and experience levels. More advanced divers can go to greater depths and explore the interiors of the ship hold more deeply than we did.

What: A World War I cargo ship turned stunning wreck dive site post volcanic eruption; now home to a plethora of macro life as well as a family of prehistoric-looking bumphead parrotfish. Like most dives around Ahmed and Tulamben, the USAT Liberty wreck is a beach-entry drive. The site is fit for divers of all experience levels.

Where: Tulamben, located on the northeastern tip of Bali, Indonesia

When: The USAT Liberty wreck dive can be enjoyed year-round

How: There are a handful of highly-reviewed dive shops based out of Ahmed and Tulamben. We dove with Adventure Divers.