Swimming with 1 Million Sardines in Moalboal 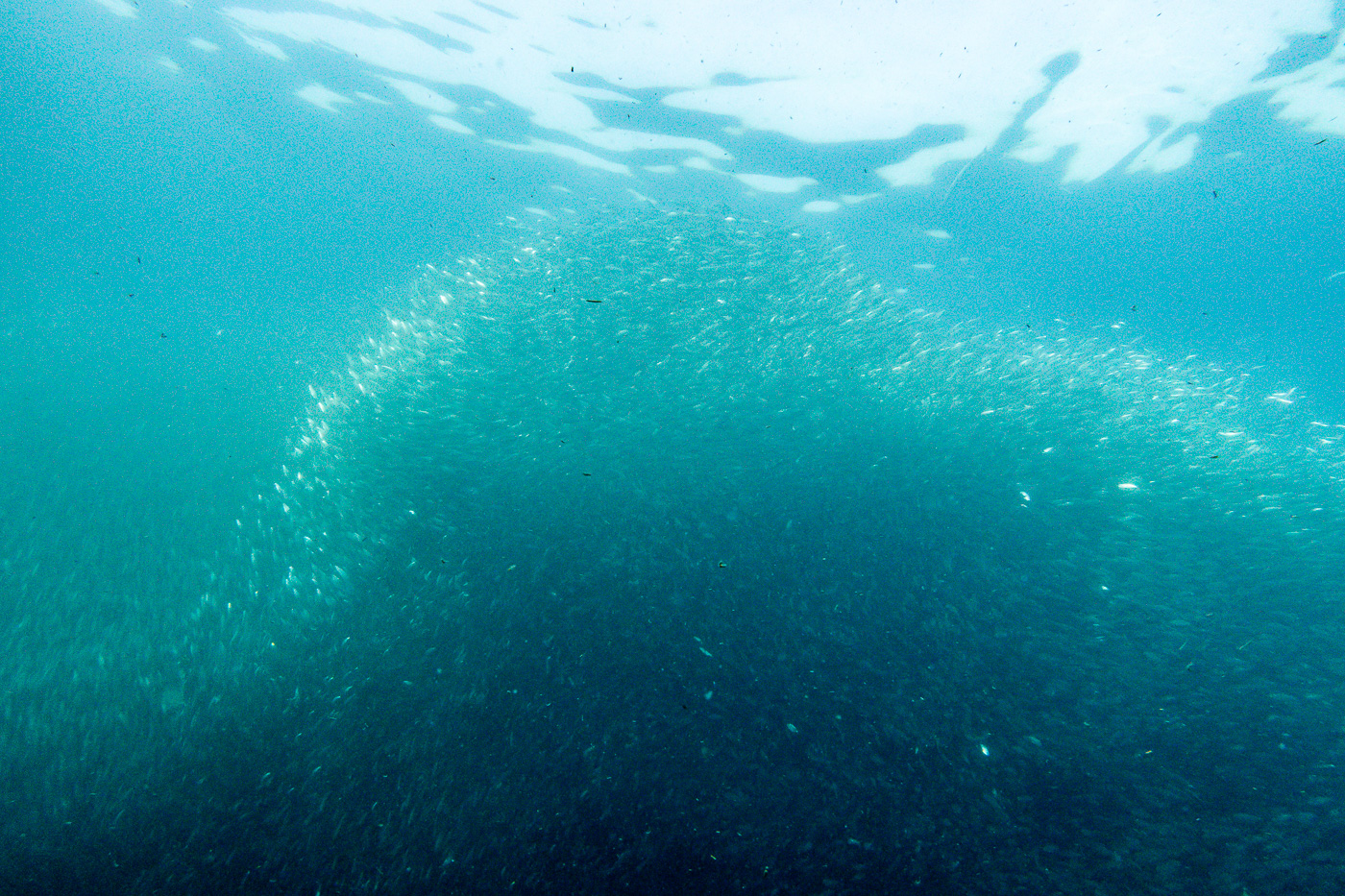 It was near indiscernible. Rudy kept pointing in the direction of the eerie abyss, reassuring us that there was something up ahead worth seeing. If I hadn’t known what we had been swimming towards for the last 10 minutes I would have thought he was crazy. But then the dark cloud ahead of us would catch a ray of sunshine and reveal a patch of the tiny, densely swimming fish; thousands of them moving together in perfect unison up. We were on the notorious Moalboal Sardine Run with expert dive guide Rudy from SeaQuest Moalboal. Soon enough we would be face to face with more than one million of these tiny flittering fish. The sight is absolutely impressive. Considering heading to Moalboal to swim with sardines? Here are answers to all of your questions. If you’re researching scuba diving in Cebu, Philippines you’ve probably come across the great Moalboal sardine run which can be experienced off the coast of Panagsama beach a 20-minute trike ride from Moalboal town. The infamous school of a million plus sardines that once called Pescador Island home have now moved even closer ashore. In fact the sardines congregate right at the reef drop-off on Panagsama beach. Shore diving is a breeze here and most dive operators have their shops abutting the shoreline. If you swim 20-30 meters from shore, the reef drops off dramatically, as deep as 70 meters in some places. And it is here where you can watch the huge cloud of sardines creating different shapes and forms against the backdrop of the spectacular reef wall. Sometimes you will even get to see predators feeding on the sardines including jacks and tunas. It is a definite must-do for scuba enthusiasts

Our Moalboal sardine run was sadly quite short lived. Water visibility was unusually poor and the sardines were already headed further off shore by the time we reached them. But getting to experience them for the few minutes that we did was worth the dive. Luckily, in addition to the sardines we had the privilege of seeing mandarin fish and the blue-ringed octopus along with countless bumbling frog fish during our Moalboal wall diving adventures.
So our advice is if you are landing on Cebu island and love to dive, go and see Moalboal as soon as you can – while its marine life is still rich and unadulterated and the sardines continue to call Panagsama beach their home.
For a look at what is in store during your Moalboal visit, check out Sumsid Lodge‘s video. Jump to minute 3:25 to see the sardine school in action! Should You Snorkel or Dive with the Sardines in Moalboal?

The great news about the Moalboal sardines is that you don’t even have to strap on a tank to be able to swim with them. The school, one million strong, typically resides a short swim from the dive shops located on Panagsama beach. We were on the fence about whether or not to dive the Sardine Run so first went for a snorkel. The sardines can be seen from the surface of the water but it was dark and hard to make out and we definitely weren’t able to get as good a sense for just how many sardines were swimming below us.

After having a fantastic night dive in Moalboal, we figured we couldn’t very well leave without diving the Sardine Run as well. Rudy from SeaQuest suggested that if we went early in the morning there would be the possibility of seeing jack fish or tunas hunting the sardines. While we didn’t get to witness predations, we did see a turtle making his rounds close to the ocean surface. And there is just something so cool about seeing the sardines move together from below.

So why scuba? From down below, you can gain a real appreciation for the enormity of the school of sardines. It was quite breathtaking. And if you are patient and slow-moving enough perhaps you will be lucky enough to have the sardines school around you. Unfortunately for us, they were already moving further away from the coastline than we had anticipated which required us to part ways all too soon.

Another option is free diving. This would be a great site for free divers who can hold their breath for minutes at a time and dive to depths of 10-30 meters. Unfortunately we wouldn’t realize how much we liked free diving until our trip to Palawan a week later. I dig the Sardine Run but what is Moalboal like?

Moalboal is becoming a diving hotspot for visitors of Cebu island but despite the increase in popularity it has been able to retain a very chilled, laid-back vibe. Panagsama beach can be a little disappointing as far as Philippines beaches go – don’t expect the smooth white sands and aqua waters of Bohol or Boracay – but the wall diving can be quite impressive here if you go with a guide who knows where to look.

Panagsama beach, where most tourists stay, is lined with a dozen or so dive shops, a number of small local eateries, the occasional gift shack and a wide range of accommodations. Don’t expect to have as many options as you will find in other more developed parts of the Philippines. But Moalboal gives you a taste for what the Philippines was like before tourism started to totally take over beach towns.

In addition to scuba and snorkel, Moalboal is a great base for other activities on Cebu like canyoning in Kawasan falls or hiking on Cebu or Negros. Can You See Sardines Year Round in Moalboal?

It is unclear why the sardines stick around Moalboal year round. Unlike the great South Africa sardine run where the shoals can be observed only for several weeks each year near Port Elizabeth during their migration from the Cape, the sardines of Moalboal have migrated from nearby Pescador Island to a quick shore dive off of Panagsama beach and generally can be seen there year-round. Of course with anything in nature, sightings aren’t guaranteed and the school has been known to take intermittent breaks so best to check with your Moalboal scuba dive center first. Do the Local Communities Feed off the Sardines?

The local community understands what a huge draw the sardines are for their tourism. So there is no net fishing allowed here in Moalboal. That said, local fisherman are permitted to row out from shore in their wooden boats and use hook and line to catch enough sardines for their family’s consumption and to sell at the local market. What’s the Best Time of Year to Dive Moalboal?

Luckily Moalboal can be visited year round. Ideally, the best months are from November to April which is also high season. Rain and typhoons are more common from May to October although Moalboal, unlike other parts of the Philippines, is sheltered so is less affected by the wet season. You’ll be pleasantly welcomed with sun and ideal diving conditions year round with water temperatures between 29-30° Celsius. If You Go: Swim with One Million Sardines on the Moalboal Sardine Run

What: The Moalboal sardine run offers the intrepid diver the unique opportunity to swim amongst one million schooling sardines. If you are patient and still enough you might even get them to engulf you in their masses!

Where: Moalboal is a small town located on the eastern coast of Cebu island in the Visayas. It is most easily reached by bus from Cebu City to the east or Bato in the south if coming from Dumaguete. Read about how we got to Moalboal in our previous post.

How: A number of scuba dive operators base themselves out of Moaboal. We dove with SeaQuest and can highly recommend dives with resident diving guru Rudy. Be sure to request smaller dive groups and plan for at least one house reef night dive to see the blue-ringed octopus and mandarin fish.

Cost: Fun dives start at 1,350PHP and 1,530PHP for night dives at SeaQuest Moalboal including tank, weights and guide. Other equipment can be rented as needed. Also be aware of sanctuary fees that also apply for most dives.