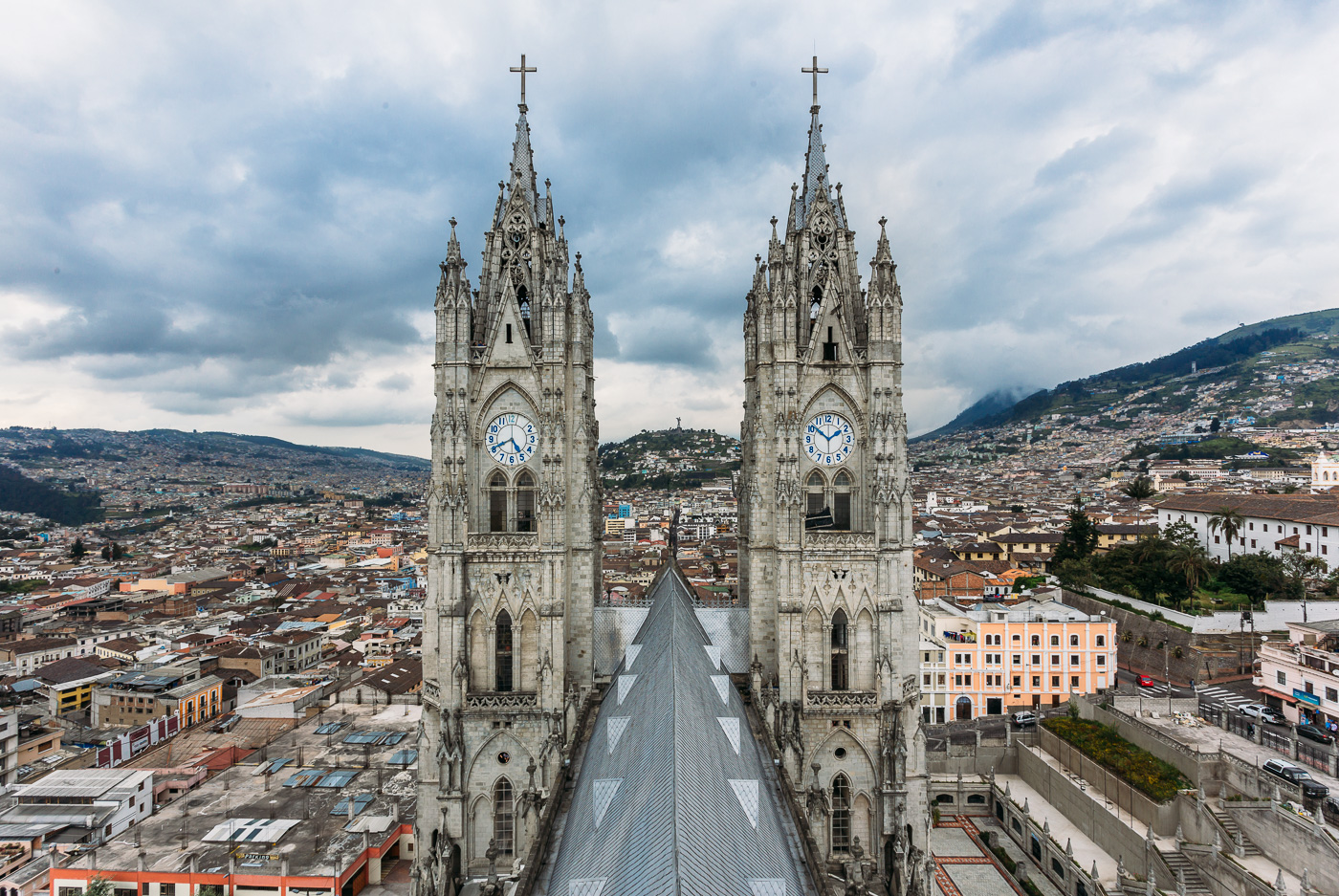 Once we had a chance to catch our breath (Quito sits at a staggering 9,350 feet at the base of the Andean foothills), we set out on foot to explore this World Heritage City. Our first stop in Quito was the Bascilica del Voto Nacional.  For a mere $2 per person, we spent an afternoon exploring the nooks, crannies and towers of this grandiose Roman Catholic church. Most amusing was climbing the North tower and trying to identify the hundreds of grotesque gargoyle-like statues of native Ecuadorian animals surrounding the exterior.  Technically the Bascilica remains uncompleted. As local legend has it, when the Basicilica is completed, the end of the world will come. The Monasterio de San Francisco and facing Plaza de San Francisco date back to the 1550’s when they were established as Francescan monks.  We didn’t have the opportunity to visit inside but apparently it is quite beautiful. Plaza Grande is an important central square in Quito as a place of executive power.  Even during pre-Incan periods the square served as the central marketplace for the region.

In the middle of the square is a monument commemorating the heroes of independence from spanish monarchy in August 1809.  The plaza is home to the Government Palace, National Cathedral, Hotel Plaza Grande and the Archbishop’s palace. Collequially known as La Compañía, this ornate Jesuit church was built in Quito over a period of 160 years, starting in 1605, reflecting a mix of design styles including Spanish baroque and Moorish architecture. Off the beaten path a bit, we had the chance to visit the office of a native Taita or spiritual healer from the Canar region of Ecuador (Jambi Hausi Casa Espiritual de Medicina Ancestral).  Among other unique healing practices, the Taita uses guinea pigs (cuy) and urine to help cure his patients’ ailments.  Today the Taita spends much of his time training other Ecuadorians who want to preserve this ancient practice. Always my favorite time of day, we stopped for a bite at the Mercado Central.  Our most delicious meal (for $5US)  was at Gloria’s.  After several days and several trips back to the Mercado Central, we were well known amongst the food vendors.

Known for its street musicians, artists, performers and poets, La Ronda celebrates the traditional bohemian way of life in Old Quito. This otherwise unassumingly sleepy street by day turns into a bustling fiesta of street performers, karaoke bars and giddy Quitenos by weekend evening.  We visited La Ronda on a Saturday to get a taste for a night on the town in Ecuador. El Panecillo was our last stop in Quito before heading to the Amazon.  El Panecillo (translated as little loaf of bread) refers to the hill south of Old Town atop which La Virgen de Quito sits.  Built in 1976, this impressive 150 foot tall religious monument of madonna is made of 7,000 pieces of aluminium.  Locals boast this is the only statue of the Virgin Mary with wings like an angel.

From the top of El Panecillo, we enjoyed a spectacular 360-degree birds eye view of Quito before heading to the bus station to await our overnight bus to the Amazon.