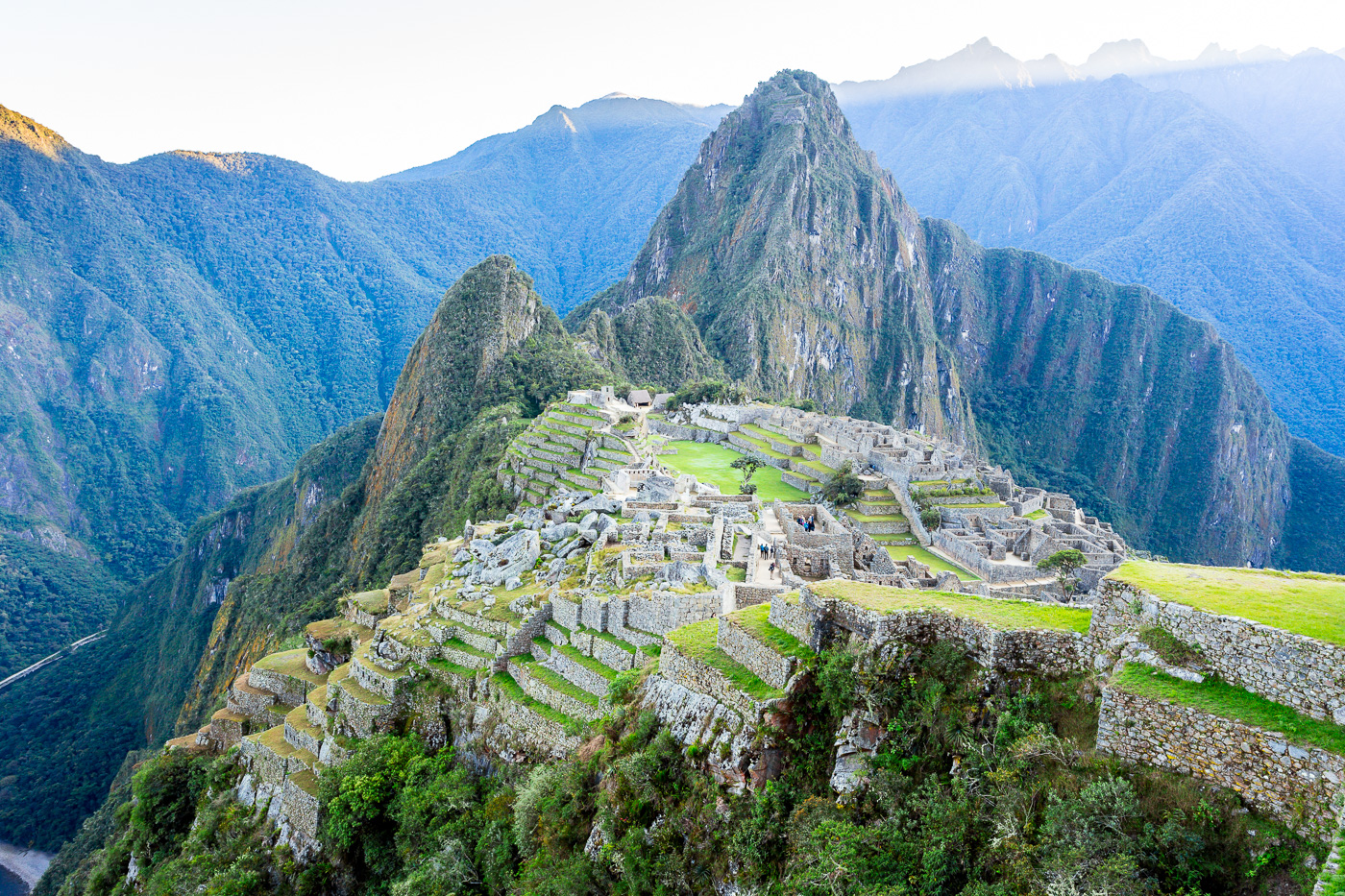 Standing high atop the citadel watching the first rays of sun spill over the Santa Teresa valley and light up the Machu Picchu ruins, I was awe struck by the beauty of this once lost city. Machu Picchu exudes an aura of majesty and grandeur that is difficult to put into words. Even the hoards of people (2,500 each day) filling its every cavity and walkway didn’t detract from its beauty. The Hut of the Caretaker of the Funerary Rock was a fantastic vantage point from which to watch the sun rise over Machu Picchu and celebrate the end of a successful five day Salkantay trek to Machu Picchu. It was the perfect start to the day. From here we walked for 30 minutes away from Machu Picchu along a narrow cliff trail to the Inca drawbridge. Only two days prior we were looking down on this same path from across the Santa Teresa valley at Llactapata. During the height of the Incan empire, this bridge was believed to have served as a check point before entering into the great Incan city. EXPLORING INSIDE THE INCA CITADEL

Once back to the main complex, we met up with our guide Wilson who explained the history and construction of Machu Picchu as we wound from one point of interest to another.

Although the purpose and use of Machu Picchu remains somewhat of a mystery to this day, one theory is that Machu Picchu was the religious, political and administrative center of the Incan empire during the 15th century. It is believed to have been home to approximately 500 inhabitants throughout the year, including royalty, high priests and intellectuals, industrialists and farmers.

The construction of Machu Picchu is truly impressive. Stones were smoothed by hand using other rocks and water and made to fit together like puzzle pieces. It is believed that Machu Picchu was constructed over a period of 50 years using some 20,000 laborers at any given time. It was especially at the Temple of the Sun, the Royal Tomb and the Temple of Three Windows where the superior craftsmanship of the Incas shown through.

The Incas were also impressively accurate astronomers. Tracking the stars played a critical role in their culture especially as it related to agriculture. The Intihuatana, or Hitching Post of the Sun, at Machu Picchu was just one example of how the Incas used sun dials to predict specific astronomical events like Summer and Winter solstices. We ended our day at Machu Picchu with a climb up Wayna Picchu.

Towering over Machu Picchu at 2,720 meters (8,924 feet), Wayna Picchu (“young peak”) is home to the Temple of the Moon and serves as an excellent viewpoint point of the citadel below. The steep 45 minute hike caused us to break a sweat but was well worth it the views at the top.

We relaxed at the boulder fields at the top of Wayna Picchu for more than an hour, climbing around the rocks and enjoying the birds-eye view of Machu Picchu before heading back to the buses for Aguas Calientes. THE MYSTERY OF MACHU PICCHU

Now having been to Machu Picchu, it is easy to see why the Incas chose this particular ridge above the Rio Urubamba as the sacred site for their empire. However it was a serious feat leveling the top of a ridge, building irrigation canals and agricultural terraces and constructing a massively complex stone fortress. Which begs the age old question why did the Incas decide to desert the magnificent kingdom they worked so hard to build?