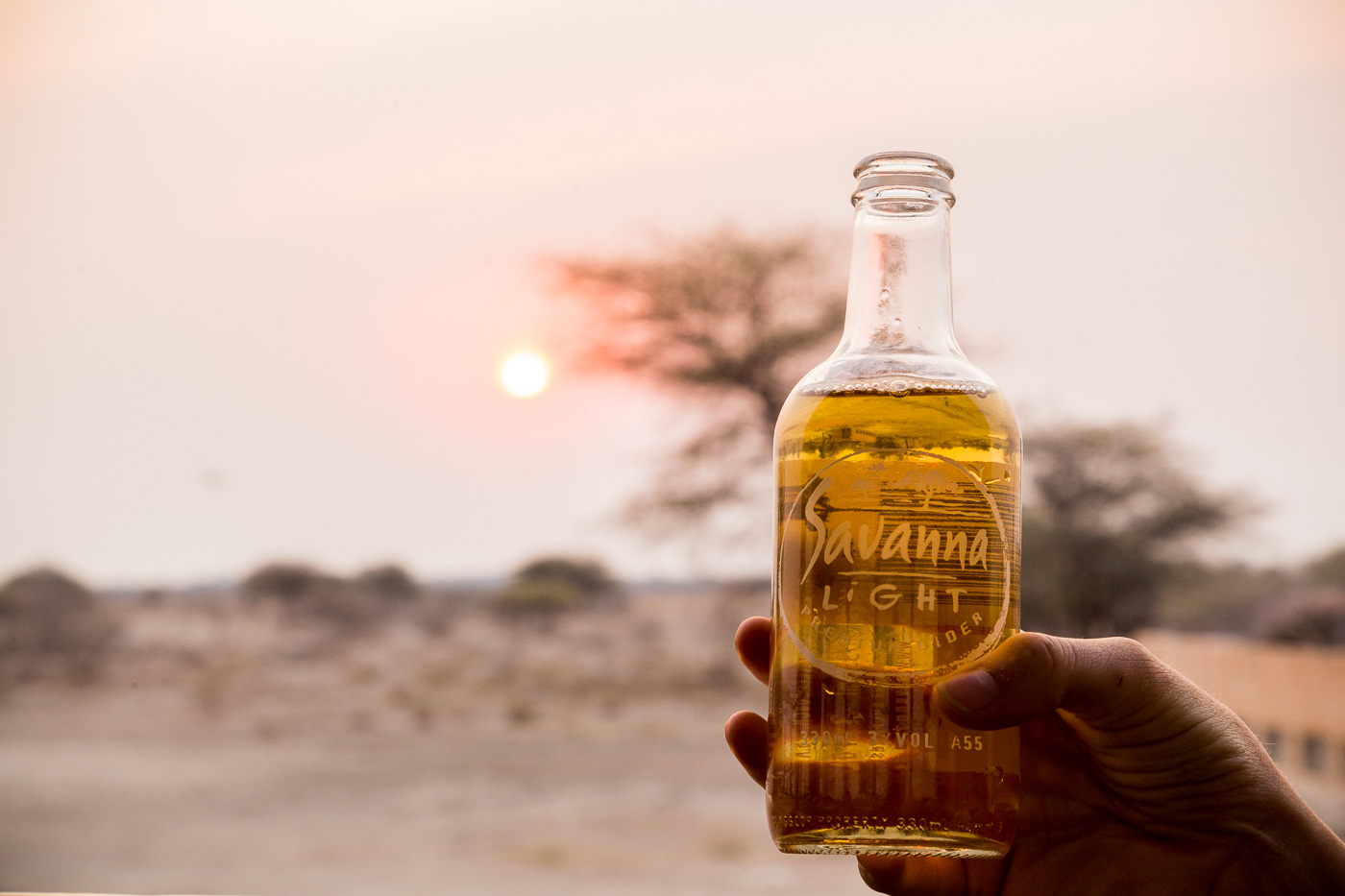 It had been a calm two hours leading up to the call. We had been puttering along the dirt roads of what seemed like the entire 84,000 acres of Onguma Private Game Reserve with only moderate sighting luck up to this point. A giraffe or two here, a pack of warthogs there. But when the ecstatic voice of a fellow nature guide beckoned over the radio about a potential sighting at the watering hole, our driver stepped on the gas. Soon we were flying over potholes and thrashing around turns in what felt like an exciting race against time to witness something big. We didn’t know what it was we were driving towards, but we knew it had to be good if he felt the need to go this fast. Thanks in large part to what we experienced next, our afternoon Sunset Nature Drive at Onguma Game Reserve was the perfect end to a day of safari in Namibia’s Etosha National Park. Located along the eastern border of Etosha National Park and sharing part of the Fisher’s Pan salt-flat, Onguma Game Reserve is a private reserve offering game drives and a wide range of lodge and camping accommodations. We opted to stay at both of Onguma’s campsites while visiting the east side of Etosha National Park during our Namibia self-drive safari. After returning from Etosha once it closed its gates for the day we took advantage of the sunset and night game drives Onguma had to offer.

Animals roam freely over Onguma’s 34,000 hectares following centuries old migration routes across the river systems. Due to its proximity, Onguma Game Reserve is home to much of the same wildlife as Etosha National Park including more than 30 different animal species from oryx, zebra, impala and giraffe to predators such as leopards, lions and cheetahs. Recently they introduced a family of black rhinos which we were keeping our fingers crossed we would have a chance to see while on one of our game drives.

Onguma is also a great location for birding with more than 300 known species migrating to wetlands on the property during the summer months. Of note is the largest breeding colony of white-backed vultures in Namibia. Our driver and long-time naturalist guide, Alfred, picked us up from the Leadwood Campsite at 4pm to commence our Onguma sunset nature drive. For the better part of two hours Alfred drove us in circles around the extensive network of dirt roads on the reserve, stopping to point out Namibia’s usual suspects: the cheerful warthogs running in packs with tails sticking up straight into in the air; the awkwardly lanky giraffes getting lost in a web of acacia tree thorns as they searched for dinner; and the beautiful doe-eyed damara dik dik who at the sight of us was shocked into stillness before jumping elegantly away in a zigzag pattern.

It was beginning to feel like a calm, rather uneventful night in the bush. That was until the call over the radio peaked Alfred’s interest and sent him into driving at rapid acceleration back to a watering hole we had visited earlier in the evening. Along the way the four of us guessed at what it could be – perhaps a rhino, no a pack of elephants.

A few minutes after scouring around the watering hole, we spotted her. A beautiful lone lioness was perched comfortably beneath the shade of an acacia tree. She sat there observing just us as we sat observing her. After a few minutes it was clear the lioness wasn’t going anywhere. So we hunkered down ourselves. Alfred pulled out the Savannah Light beer and a delicious fruit and tapas platter to enjoy. Over the next 20-30 minutes packs of springbocks and blackfaced impalas passed by the watering hole, taking caution of us but often not noticing the lioness lurking nearby. At times it looked like she might be getting ready to stalk and pounce on her unsuspecting prey. But as soon the impalas satiated their thirst and continued on their way she relaxed again, content with staring back at us curiously.

All too soon the orange African sun started to dip below the horizon. This was a sign that it was time to finish our beers and say goodbye to the lady of the watering hole. Alfred was hopeful that those on his night game drive might get to see her stalk and kill (something we would later learn in reality is very rare to see while on safari). We hoped for their sake that was the case. As for us, we were content with our beautiful African sundowner with a lioness. After reading about the night game drives at Onguma we were eager for the opportunity to try something a little different. Night drives are a great opportunity to spot animals who are only active by moonlight, such as leopards and jackals.

This time our driver and guide, Samuel, was accompanied by a spotter, Timotheus, who used his spotlight to try to find animals sleeping in trees or stalking on the ground. It turns out this is far more difficult than one might guess, especially while driving.

The big sighting of our night drive ended up being an African wildcat. Were it not for Samuel’s excitement about this rare creature (for Namibia), Adam and I would have guessed it was a typical house cat who had gotten lost in the bush. As it turns out, the African wildcat is an ancestor of the the domesticated house cat and a fierce nighttime predator who stalks smaller prey such as rats, birds and reptiles.

In the end, our night drive was rather uneventful (Samuel and Timotheus insinuated this was an especially quiet night on the reserve). Additionally, and I suppose as one might expect, it was really tricky to take good photos of the wildlife at night. For these reasons, if given the choice, we would suggest visitors of Onguma participate in the sunset game drive rather than a night drive. All the same it was a unique experience while on our Namibia safari. As you are research Etosha campsites and lodges, consider staying five-minutes outside its Von Lindquist Gate at one of the Onguma’s two luxury campsites (200 Namibian Dollars per person or US$12.60/night). The greatest benefit we saw to staying at Onguma over the Etosha National Park campsites is the quality of the facilities. With the exception of Okaukuejo (with its famous nighttime watering hole), the Etosha campsites are overcrowded and run down. Conversely Onguma had the nicest campsites of our 10-day Namibia self-drive. This made it especially easy to prepare meals and relax after a long day riding around. In addition we enjoyed spending our afternoons and evenings on a private game reserve going on game drives.

We loved our stay at Onguma’s Tamboti Luxury Campsite. Our site was large and surrounded by trees, providing us privacy from other nearby campers. The facilities at our site were well taken care of and in great condition, including a large bathroom (shower and toilet) and outdoor kitchen with plenty of storage space. There was also a restaurant, supply store and pool on site, though we were so busy we didn’t take advantage of these resources.

We spent our second night at Onguma’s Leadwood Campsite. The amenities at Leadwood are all the same as Tamboti, however we felt way more exposed at this campsite with few trees or other barriers separating one camp pad from the next. For this reason, we’d suggest Leadwood over Tamboti only if you are traveling in large groups or caravans and are seeking a campsite that connects everyone. Either way you can’t go wrong with an Onguma camp site when compared to those we passed through in Etosha. If You Go: Onguma Campsites and Sunset Game Drive Logistics

What: Take a break from driving on your Namibia self-drive safari and let Onguma Game Reserve lead you on a stunning sunset game drive to hopefully see some of the larger predators of the savannah. Also check out the luxury Onguma campsites available.

Where: Onguma Game Reserve lies directly to the east of Etosha National Park in Namibia. It is the closest lodge, campsite and reserve outside of Etosha’s Von Lindquist Gate.

When: Onguma Game Reserve can be visited year-round. However, game viewing is best during the dry, winter months between May to October.

How: Namibia is a great introduction to self-drive safaris due to easier driving conditions on the roads (compared to South Africa or Botswana) and far fewer people on the roads. For a turnkey self-drive option, consider hiring a 4×4 with rooftop tent from ASCO Car Hire. The car is outfitted with all the gear we needed for 10-days of camping.

Disclaimer: Onguma Game Reserve hosted us on our Sunset and Night Game Drives, however as usual all opinions are our own!