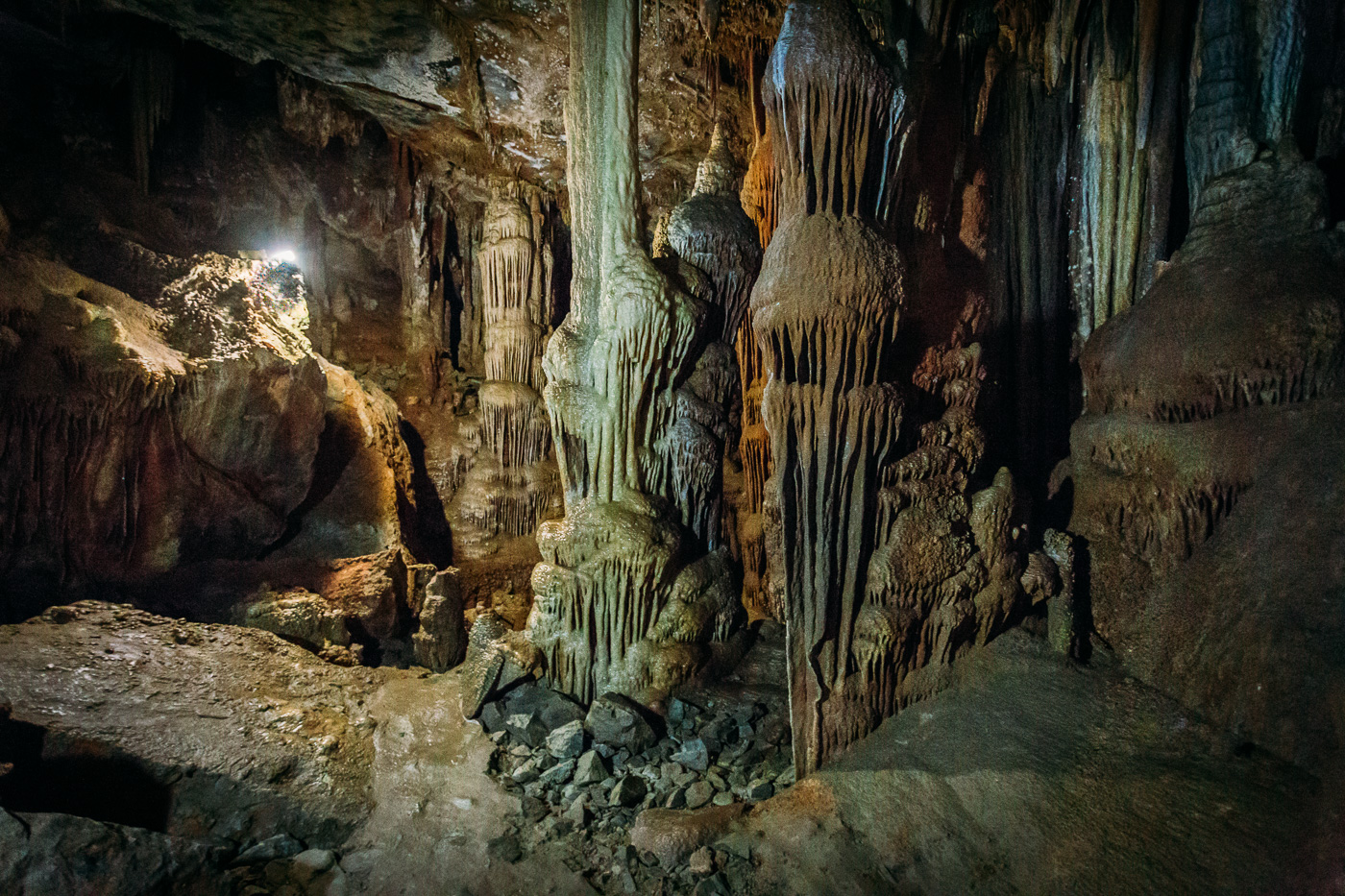 Nestled between the Outeniqua and Swatberg mountain ranges in the arid Klein Karoo, the Cango Caves is a natural wonder well-known on the tourist circuit for its stunning display of colorful stalactites and stalagmites 100-million years in the making. It is precisely for this reason that we were a bit skeptical about the so-called Cango Caves Adventure Tour when we rolled up to Oudtshoorn on our Garden Route motorcycle safari. With how retrofitted Cango Caves has become for the average tourist, complete with its paved walkways and handrails, we had a hard time imagining the Adventure Tour would be, well, very adventurous.

But we would quickly find out that once you start climbing Jacob’s Ladder, the Cango Caves Adventure Tour leaves comfort behind and has you slithering, squeezing and crawling your way kilometers deeper underground in search of breathtaking limestone formations. An added bonus of the Cango Caves Adventure Tour is that your first 30-minutes are spent exploring the same route as the Heritage Tour, starting with Van Zyl’s Hall.

Measuring 18 meters high by 50 wide and 90 long (59 x 164 x 295 feet), this great hall was named after the farmer Jacobus Van Zyl who was first to discover the Cango Caves in 1780 after being lowered down into the giant cavern with only the light of an oil lamp. The acoustics are also so good in this hall that up until recently they used to hold orchestral concerts here. Our guide gave us the opportunity to test our musicality and the cave’s acoustics but being tone deaf we decided instead to pass and just take her word for it.

Next the tour continues on to a series of smaller but still sizable chambers including Botha’s Hall, the Rainbow Room and Fairy Hall. Though not equal in size to the first, these far surpassed Van Zyl’s Hall in beauty with their shimmery limestone waterfalls, cascading organ pipes and conjoint stalactites and stalagmites which have been growing (every so slowly) for so long that they’ve now fused together into a single column spanning from floor to ceiling.

Having only completed the first half of the tour at this point, we could already say Cango Caves has some of the most beautiful dripstone rock formations we’ve ever seen. Despite the overwhelming size of these first few chambers, the intricacy of the stalactites and stalagmites combined with the tastefulness with which the rooms are illuminated (with very natural lighting which also helps to preserve the limestone long-term) made this a really special and other-worldly place to visit. Once you reach Jacob’s Ladder (not actually a ladder but a series of 200 gently rolling stairs leading to a seriously tall metal ladder), you’ve started the Adventure Tour. At this point you start to feel the depth of the cave as the air thickens with moisture trapped deep inside it.

The next 45 minutes will be spent on your hands and knees crawling, climbing, scooting and squeezing your way through an odd subterranean world. Along the way you pass beautiful rock formations like Lumbago Alley, King Solomon’s Mines, and Devil’s Chimney. However, it’s the more mentally and physically challenging passages that were most memorable for us. Key among them were the Tunnel of Love, named so because of the squeeze you feel from all sides as you inch yourself toward the light, and the Devil’s Post Box, a slit so narrow (all 27-centimeters or 10.6-inches) that you literally have to stuff yourself through it like an envelope being stuffed into a mailbox. Our minds were put to ease as our expert guide was with us every step of the way to coach us through the tricker parts of the cave.

Is The Adventure Tour Right For You?

The Cango Caves Adventure Tour may not sound like fun to everyone but for those who are reasonably fit, with steady nerves and an appetite for adventure its worth the short exploration deeper into Africa’s largest cave system. Unfortunately, because this tour was meant to appeal to the masses, experienced spelunkers out there will more than likely be disappointed by how dulled down the caving is. Having said that, we were pleasantly surprised by how much we enjoyed our 90-minutes of climbing, squeezing and scooting.

Due to the size of a few of the passages, we wouldn’t recommend this tour to those who get at all claustrophobic. Though I don’t typically suffer from claustrophobia even I had a mild feeling of panic at times squeezing through some of the passageways. If you are at all questioning whether you’ll be okay working your way through these smaller channels, check out the display in the lobby of Cango Caves next to the ticket counter which lets you climb through a slot the size of the actual passageway. What: Africa’s longest cave system and most beautiful show caves, Cango Caves, offers both Heritage (aka easy) and Adventure Tours. Once you’ve completed the Heritage Tour, consider continuing on another 2.1 kilometers through a world of mysterious and strangely beautiful chambers, passageways and crawl spaces. You’ll be on your hands, knees and butt for most of the next 45 minutes as you crawl and squeeze your way through this subterranean world so wear comfortable grippy shoes and clothes that cover your body.

Where: Cango Caves is located 30-kilometers north of Oudtshoorn in South Africa’s Klein Karoo via Route 328. Be aware there are no petrol stations nearby so if you are running low on gas fill up on your way out of Oudtshoorn.

When: Cango Caves can be visited year-round (excepting Christmas Day) between the hours of 9:00am and 4:00pm. Normal Heritage Tours depart daily every hour on the hour. Adventure Tours last 90-minutes departing at 9:30am, 11:30am, 1:30pm and 3:30pm.

How: Contact Cango Caves at +27 (0)44 272 7410 or reservations@cangocaves.co.za. Apparently they are now limiting the number of visitors who enter the caves each day in an effort to control harmful carbon dioxide emissions so it is necessary to book in advance to guarantee your space.