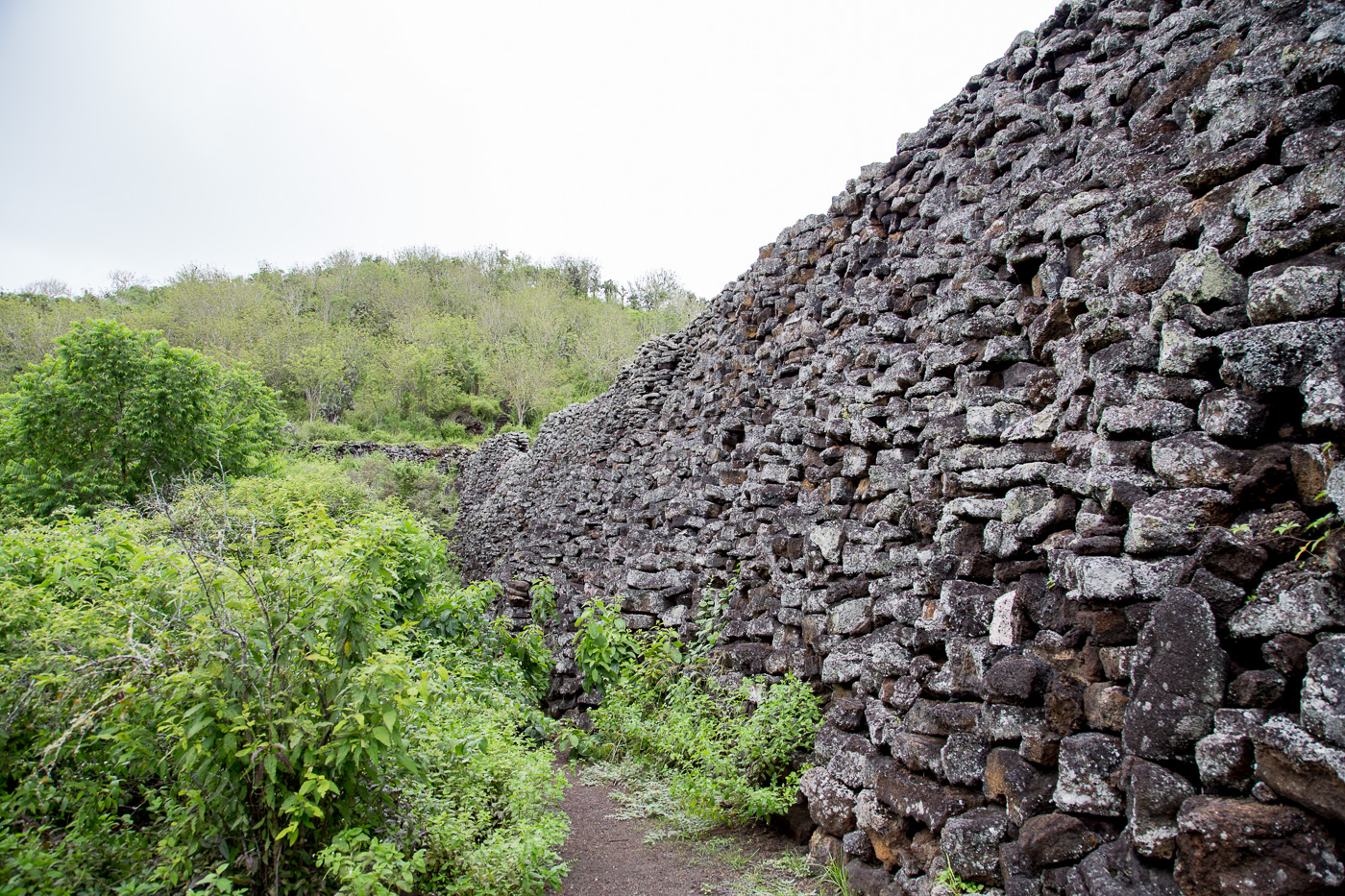 We arrived to Isla Isabela’s main port (Puerto Villamil) by speed boat around 10:30am leaving us with the rest of the day to explore. Unfortunately, we soon learned that there are no ATMs on the island and we thus needed to stretch the money we had on us at the time for the next three days. So we were excited to discover a cheap and fun afternoon activity in biking to the wetlands (Los Humedales) and the Wall of Tears (El Muro de las Lágrimas). Following Isla Isabela’s main road southwest of town, we stopped to rent a pair of well-worn mountain bikes from a shop for $2/hour. (And we’re so glad we did as this would have much too far a walk in the balmy afternoon sun.) We took the sandy trail past Puerto Villamil’s beaches and cemetary for four kilometers until we reached the entrance to the national park of Los Humedales and El Muro de las Lágrimas.

As we rode along, the landscape changed; the sandy path turned to sharp volcanic rock gravel and the white beach shoreline was replaced with a thick mangrove forest. Los Humedales (translated as the Wetlands) is home to all four species of mangroves found in the Galapagos. We leisurely detoured down one side path to another getting lost in their tangly roots, forging our own trail deeper and deeper until the sky and sun were barely visible through their branches overhead. Back on the main trail, we biked alongside countless tortoises who were making their way slowly from one side of the road to another. Los Humedales is now the home of a giant tortoise sanctuary for critters between 5 and 25 years who are being re-released back into the wild from Isabela’s breeding center. Most were shy and a bit skirmish when approached from behind but they tolerated our taking pictures and walking up close to say hello. The Wall of Tears (El Muro de las Lágrimas) holds historical significance for the Galapagos as the site of a former penal colony during the 1940’s and 1950’s. It’s name, Wall of Tears, was aptly given due to the harsh conditions under which the prisoners were made to construct the wall by hand.

The story goes that prisoners were made to walk long distances in the hot mid-day heat to cut slabs of volcanic rock and carry them back to the site of the wall. Here the volcanic stones were stacked up to 65 feet high (25 meters) apparently causing thousands of deaths during the wall’s construction. Years later, the site received the name Wall of Tears from the locals on the island as they could hear the loud wails and cries of the prisoners as they were forced to build the walls of their own confinement.

After taking a few minutes to soak in the somber site of the former penal colony, we set back to Puerto Villamil. While we probably could have gotten lost for another couple of hours along the various side paths discovering secluded beaches, natural pools and lava tunnels. But we were eager to get back for sunset with the blue footed boobies at Puerto Villamil’s main docks.

Departure time: Whenever though we’d suggest earlier in the day before the sun is at its peak

Duration: 18 kilometers in total; half-day to full-day excursion depending on your time availability

Included: Nothing, bring lots of water and snacks