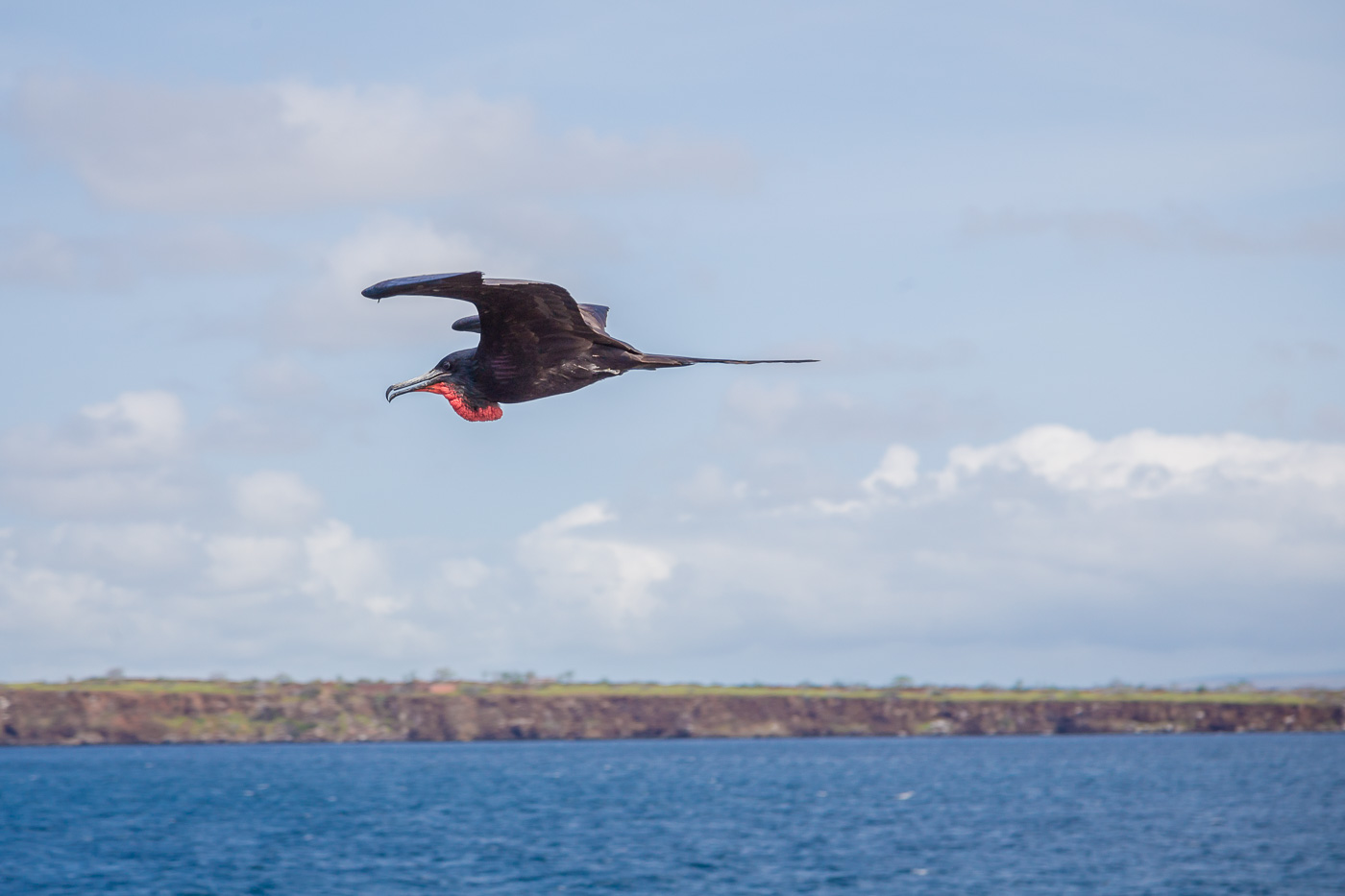 Once we’d made the decision to bag the multi-day cruise and map out our own adventure across the Galapagos Islands, we knew a trip to Isla Seymour Norte to see the iconic blue footed boobies and frigate birds was on our list. We booked our full-day excursion through a local Puerto Ayora travel agency (Los Viajes de Darwin) who offered us a last minute discount for booking the night before.

While not the most adrenalin-filled or active of day trips, we were excited to spend the day on a boat in transit to Isla Seymour Norte with a morning stopover at Bachas Beach for snorkeling and exploring. A 45-minute drive and 45-minute boat ride on the Espanola I from Puerto Ayora later, we water landed at Bachas Beach. Sitting at the north end of Santa Cruz Island, Bachas Beach was a great introduction to Galapagos’ wildlife and picturesque scenery. While the snorkeling wasn’t anything to rave about, this small patch of white sandy beach was dotted with clusters of black volcanic rocks where we could observe up close the Sally Lightfoot crabs (red rock crabs) and marine iguanas. The Sally Lightfoot crabs, named after a vivacious Caribbean nightclub dancer, are quick and agile when approached making them difficult to see for long up close before they dart off. Their brilliant red, yellow and blue colors and ability to cling on to the rocky surfaces amidst the crashing waves made them entertaining to watch. Quite opposite the crabs, the marine iguanas were a lazy and chill bunch. Blending in with their volcanic rock surroundings, they barely acknowledged our presence as we moved in to take a closer look at their spiny dorsal manes and prehistoric salt-encrusted faceplates. As Adam approached one to snap a photo, the iguana snorted water out of his nostrils, catching us both by surprise. We later learned they do this to expel excess salt from their bodies, not to hiss at pesky tourists as we were originally led to believe. An endemic species of the Galapagos Islands, the world’s only marine iguana adapted over the millennia to survive in its new barren habitat by swimming in the ocean and eating algae.

Bachas Beach is also home to a small flamingo pond, but unfortunately we didn’t see any before we had to depart for lunch and transport to Isla Seymour Norte. A STROLL AROUND ISLA SEYMOUR NORTE

Another 45-minute boat ride later, we were transported in small groups via panga to a rocky landing on Isla Seymour Norte. As we approached, frigatebirds loomed in the breeze overhead giving us our first taste for what was in store for us on shore. From our drop off point we embarked on an easy 2.5-meter walk around the island, moving at snails pace to take in the abundance of wildlife.

And boy was there an abundance of wildlife! It was almost comical how every time we’d finished observing and snapping pics of one animal there would be another around the corner waiting (and some posing) for us. The brilliantly colored gold land iguanas were the first animals we crossed paths with on Isla Seymour Norte. Much larger in size than their marine counterparts, the land iguanas average around 3 feet long and 30 pounds (for the males). They live a lazy existence moving from sun to shade to sun to shade, feeding on cacti and shrubs in between. Unfortunately the blue footed boobies were few in number during our day trip, which was disappointing since Isla Seymour Norte is a major breeding site for these unique and eccentric creatures. It was a good reminder early in our Galapagos adventure that you are never guaranteed to see anything in nature. The few blue footed boobies we did see were protectively perched atop their nests keeping their eggs warm. More to come on these awesome birds in our Isla Isabela post. The Magnificent Frigatebirds Steal the Show

It was the beautiful frigatebirds who stole the show today with their bulbous red throat pouches proudly on display. Isla Seymour Norte is home to the largest nesting site for frigates in the Galapagos where they can be found mating and nesting year round due to the favorable climate. The male frigates inflate their brilliant red scarlet throat pouches, known as gular pouches, to attract the females to mate with them. Once they’ve found a mate they build a nest of sticks in a low-lying trees or bushes where the male and female take turns incubating the egg for 50 days until it hatches. The chick stays with the nest until it is six months old.

With the tour complete, the remainder of our afternoon was enjoyed from the front deck of the boat taking in some sun before a 45-minute return ride to Puerto Ayora.