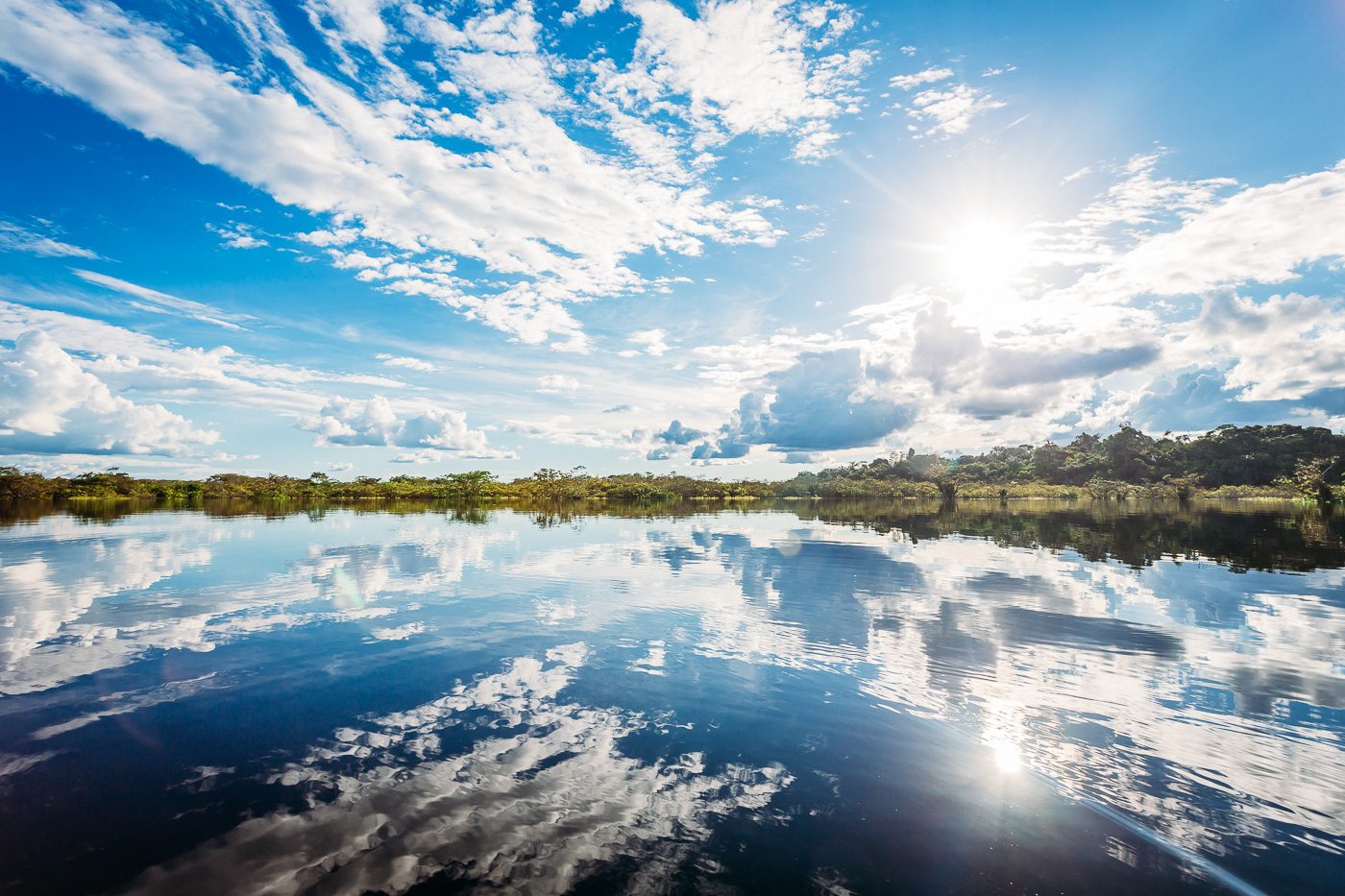 It was a hot, hazy Tuesday in May when we embarked on our slow boat trip down the Rio Cuyabeno.  Our destination was Cuyabeno Lodge, the original eco-resort of this remote 1.5 million acre protected area in Ecuador’s Oriente (East) called the Cuyabeno Wildlife Reserve. For more than two hours we traveled downriver from the oil city of Lago Agrio.  Along the way our tour guide for the week, Guilver, would signal the boat captain to slow the motor so that he could point out a pack of spider monkeys or stinky turkeys (aka wild chickens) barely visible in some tall, distant tree branch.

Around bends and buckles we crept deeper and deeper into the Ecuadorian Amazon until finally the river opened up into into a large still reflective lake.  “Look, look,” Guilver exclaimed pointing to a small disruption in the otherwise smooth lake surface.  Two greyish purple dorsal fins appeared side by side in unison before quickly disappearing again.  “The pink river dolphins are welcoming you to Cuyabeno!” Guests of the Unspoiled Jungle

The majority of our time in the Amazon was spent in a boat, either paddle or motor, navigating narrow rivers and creeks in search of wildlife.

By day we were able to spot packs of spider and capuchin monkeys playing together in the tree branches, watch snake-necked birds and king fishers elegantly fan their wings out to dry under the sun, follow bullet ants as they marched with leaves from tree to nest, and on rare occasion creep up (a little too close in my opinion) next to anacondas coiled in trees. The brilliantly colored blue and yellow macaws were beautiful to watch – they are monogamous animals who mate for life so were typically seen flying or perched in pairs. As the sun set on Cuyabeno, we would visit the Laguna Grande for an evening swim before our night walk or paddle boat ride in search of caimen, anacondas, spiders and frog species.  After the day’s activities were completed we’d eat a delicious dinner and watch a video recap of our daily sightings via small camera projector and draped sheet.  Then we’d retire to our rustic cabin to be lulled to sleep by the hums of insects. The Trees Have Eyes

We were quickly lost in the enormity of the Amazon. Spanning eight countries in South America, the Amazon covers 1.4 billion acres of dense tropical forest and is home to one in ten known species on Earth. The Cuyabeno Wildlife Reserve is ecologically unique in the Amazon as a flooded forest for most of the year thanks to water runoff from the nearby Andes. The climate lends itself to a higher density of biodiversity including 10 species of monkeys, 500 bird species and more than 300 species of trees per hectare. Despite these favorable odds for animal watching, it feels as though we barely scratched the surface in terms of the wildlife we were able to see. Which made us wonder, if we could see all of these incredible animals from the comfort of a river boat, what was hiding just beyond the river bank that we couldn’t see? On one rainy day we boated 30 minutes down river to a small village of the Siona people to make traditional yucca bread.

The Siona people are one of five indigenous ethnic groups living in the Ecuadorian Amazon.  In the 1990s the Ecuadorian government appropriated the Siona people a large swath of territory along the Cuyabeno river.  While historically a nomadic people, many chose to settle and ever since they have been engaging in tourism activities to supplement their traditional subsistence activities (such as hosting tour groups at their villages).  Many of the lodges and boats in the Cuyabeno Wildlife Reserve have been built by the Siona people.

In total it is estimated there are only 250 Siona people left in Ecuador today. Reflections on Our Amazonian Experience

In the end, our trip to the Amazon didn’t quite live up to our expectations.  In large part, we attribute this up a less than awesome experience with our tour operator and unengaged guide.  Beyond this, however, we spent a lot of time and money getting to the Amazon and were a bit underwhelmed with the experience of spending hour after patient hour wandering around in a boat searching for wildlife that was too far away to really see well. I think we would have enjoyed it more were we more interested in plant, insect and bird species.

We also were a bit confused by our visit to the Siona village where people seemed to live modernly and yet we were there to observe them bake yucca bread in a traditional fashion.

I know we barely scratched the surface of the Amazon on this trip and I am confident there are so many amazing wonders to observe but this excursion was a bit too slow paced (for Adam) and too expensive for our budget this time around.