More to Moalboal Diving Than the Sardine Run 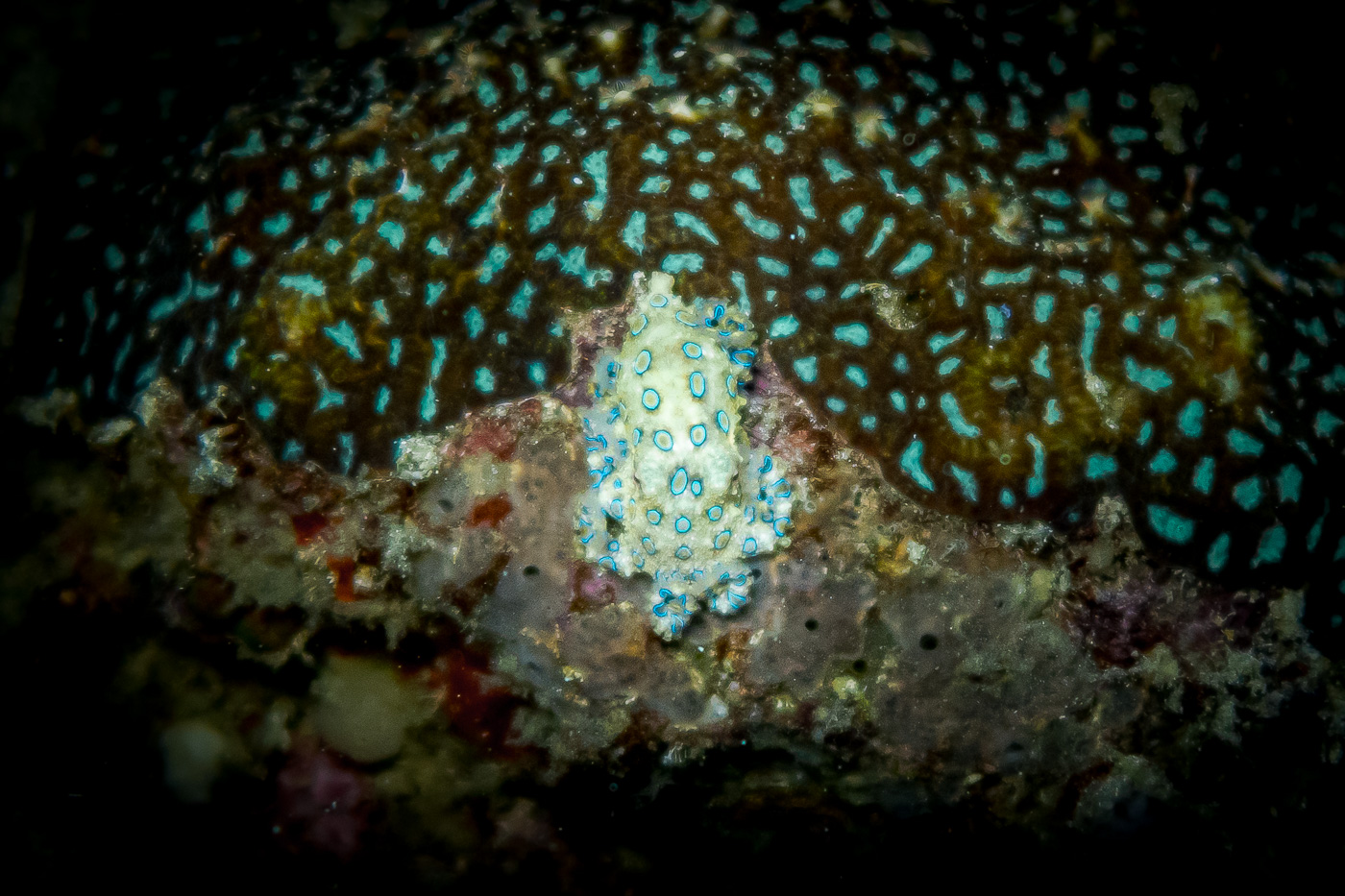 Moalboal has earned itself a reputation on the Philippines scuba diving circuit for its resident school of sardines. A whopping one million of these shiny silvers used live at nearby Pescador Island but in recent years have relocated to the wall right off of Moalboal’s Panagasama beach. But just because you come all the way to this chilled out scuba strip to swim with the sardines doesn’t mean that’s the only underwater treasure to uncover here. Our Moalboal night dive and wall dive post- sardine run with our expert local guide from SeaQuest were some of the best scuba we enjoyed while in the Philippines. So do yourself a favor and stick around Moaboal long enough to explore the other wall dives and adventure activities on offer here. We were so thankful to have chatted it up with a Dutch couple who had gone out on a night dive the day prior with SeaQuest’s resident scuba Yoda, Rudy.

“You’ll want to see this! Mating mandarin fish!” they exclaimed, “And a blue-ringed octopus. All just a night shore dive around the house reef!”

That’s one of the things we love so much about diving – how enthusiastic divers are about their sightings. We were sold by the chance of seeing either. The Most Epic Moalboal Night Dive

Just as the sun started to set, we geared up and followed Rudy into the deep blue to the edge of the house reef wall. Here, at a large grouping of hard corals, we would watch and wait for the mandarin fish to come out and play.

The mandarin fish are one of the ocean’s most colorful fish, distinguished by their bright orange and blue stripes. Their mating ritual is also quite a sight to behold for underwater enthusiasts. It starts with a dance by the male mandarins who, if deemed desirable, will be joined by a female mandarin just as the sun sets and rise out of the reef about a meter high to spawn and disperse a cloud of eggs that are then at the mercy of the sea to survive.

We were instructed not to use our torches until Rudy gave us the go-ahead as they get spooked by the light. So we dug in and waited. And sure enough one colorful dragonet poked out from the shelter of the coral. A minute later another. Soon two were together dancing. We hovered there fascinated for at least 20 minutes and watched as they disappeared and appeared again. The currents were strong that night, but we each found our positions (and tested our buoyancy skills) and watched for the next mandarin. Sadly it would not be our luck that the mandarins would emerge from the shelter of the corals after dark and perform their mating ritual, but no matter as we were thrilled to have seen so many already. Plus there were exciting fish still yet to spot!

From the corals we plummeted down the wall. Rudy led the line of the five of us, but collectively we made a chain, each searching with our torches. As soon as Rudy spotted something he’d tap his tank to let us know there was a find. Up next an octopus hiding in a crevice. Then a beautiful small orange painted frog fish followed by an orangutan crab.

However, as soon as we heard the rapid clanging of the tank we knew he’d found it! The four of us swam eagerly up to Rudy’s light, and there she was, a magnificent (and extremely dangerous) blue-ringed octopus!

The blue-ringed octopus is the most venomous of all sea creatures and here we were staring at one less than a meter away. It is so odd how elated I felt at that moment watching her sit and pose for photos on the rocks. Every once in a while she would decide she’d had enough and move to another rock further below. With her legs fully stretched in propulsion she must have been no bigger than the length of my outstretched hand. How Rudy was able to spot her in the dark of the wall we’ll never know but we were so grateful that he did. Our final spot of the day was a giant bumbling painted yellow frog fish just two meters deep near the SeaQuest Moalboal office.

After this epic Moalboal night dive, we couldn’t resist a final Moalboal dive off the house reef after a quick swim with the sardines. The next morning, Rudy agreed to take us out early. This time we would be headed towards the resident sardine school with the hopes of seeing predator fish feeding. After our Moalboal sardine run, we had another awesome spotting session with Rudy on the wall just off of SeaQuest’s house reef. Among our finds were two friendly sea turtles, seal faced pufferfish, spotted morays, flatworms, lion fish, boxfish, scorpionfish, and giant frog fish. What most tourists refer to as Moalboal is actually Panagasama Beach, a 20-minute trike ride from town, which consists of a tiny strip of dive resorts on a mostly nonexistent beach. Compared to Alona Beach on Bohol or El Nido on Palawan, Moalboal is extremely chill.

We were visiting Moalboal for one reason – scuba diving! After hearing how booked out the Malapascua thresher shark diving was in northern Cebu we opted for Moalboal instead. We went on four dives with SeaQuest Moalboal, a 5 Star PADI shop with 30+ years of history and a good track record of reviews online. Our experience on private dives with Rudy was excellent. However, our other dives were very hands off and we were left to ourselves to spot and perform safety stops. As we noticed at a lot of the dive shops in the Philippines, there is far less hand-holding in Moalboal than in Indonesia or Thailand so newer divers should know what to expect and be mentally prepared when diving in the Philippines. If possible, we’d highly advise bringing your own dive computer – after our Philippines diving, it will be one of our next big investments.

Moalboal For the Non-Divers

Not into scuba diving? The good news is Moalboal offers a host of other activities to keep you occupied while you are visiting Cebu including hiking, biking, and the popular canyoning trip at Kawasan Falls. How to Get to Moalboal

We arrived to Moalboal by way of local bus from Cebu City. We came direct from Cebu’s Mactan Airport to the Southern Bus Terminal via cab for 250PHP – we have it on good authority that the white cabs are cheaper than the yellow.

Once at the Southern Bus Terminal we’d suggest waiting it out for one of the air-conditioned yellow Ceres Liner buses for only 7PHP more than the non-aircon bus (147PHP per person). These depart every 30 minutes or so. Two to three hours later you’ll be dropped at Moalboal’s main shopping center (bus time depends on traffic and number of local stops). Once in Moalboal, there will be trike drivers ready to take you to Panagasama beach. The ride to Panagasama should be around 20 minutes and cost no more than 100PHP. What: For years Moalboal has been drawing scuba tourists to its sleepy shores thanks to its famed school of sardines (originally near Pescador Island and now off its Panagasama Beach). However, if you stick around long enough there are 10 other dive sites here to explore. The house reef dives in particular are host to a trove of unique macro life and sea critters if you have a guide that is willing to show you. Moalboal is also a great base for outdoor adrenaline junkies to plan hiking, biking and canyoning excursions.

Where: Moalboal is a small town located on the eastern coast of Cebu island in the Visayas. It is most easily reached by bus from Cebu City to the east or Bato in the south if coming from Dumaguete.

How: A number of scuba dive operators base themselves out of Moaboal. We dove with SeaQuest and can highly recommend dives with resident diving guru Rudy (be sure to request smaller dive groups).

Cost: Fun dives start at 1,350PHP and 1,530PHP for night dives at SeaQuest Moalboal including tank, weights and guide. Other equipment can be rented as needed. Also be aware of sanctuary fees that also apply for most dives.

Disclaimer: Our Moalboal wall dives were supported by SeaQuest Moalboal. As with everything on our blog, our opinions above are an honest account of what we experienced. As you consider your options for Moalboal scuba dive speak with Rudy at SeaQuest Moalboal (63-32) 406-5980, info@seaquestdivecenter.com).