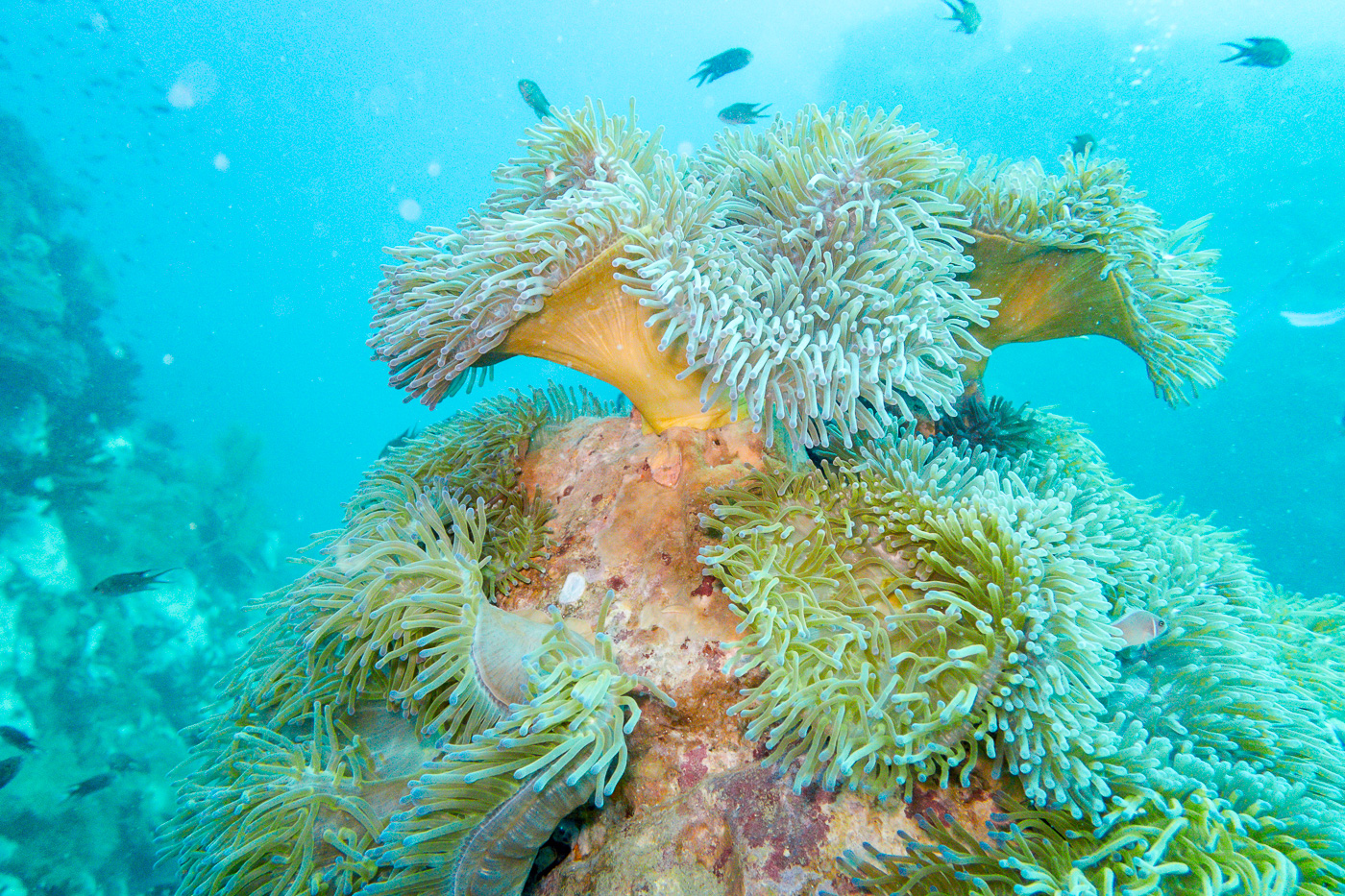 It was a good ten seconds before he came into focus. Our dive master Sam had been pointing at something near the craggy overhang at the ocean floor for a while but the visibility in this particular part of the cove was very poor. Then suddenly he emerged, mouth gaping, from a dusty cloud of white particles. He was uglier than I had imagined, brown and spotty, and bigger too. Sam had warned us that the giant groupers here at Southwest creeped her out a bit. Now I could see why. He didn’t take much heed to us, instead continuing to wade back and forth feeding near the sand. He was the first of a handful of giant groupers that we would see at Southwest Pinnacle, one of Koh Tao’s most popular dive sites. This, along with Shark Island, would be our first day of dives with New Way Diving at Southeast Asia’s diving mecca, and it did not disappoint. Just as New Way Diving had promised, we were the first to arrive in the morning, departing from the Koh Tao pier at the ungodly hour of 6am. (Though we would learn early morning alarms are a worthy the price to pay to swim alone in uninterrupted waters while deep water visibility and fish life are at their highest.) A 45-minute boat ride later and we were pulling up to the buoy that marks the Southwest Pinnacle. Our descent followed a rope down to the deepest part of our dive around 23 meters (you can go to a max depth of 30 meters though visibility was quite bad at depth).

Immediately we were swimming amongst a shoal of fusiliers, their bodies collectively obliterating our view of the pinnacles below at times. As we moved along the fusiliers were replaced by a school of patrolling chevron barracudas which never ceases to impress me. Measuring up to 3 feet in length, chevron barracudas are fast and voracious predators in the Indo pacific but aren’t dangerous to divers like the reputation they’ve come to inherit.

The most striking scene of Southwest Pinnacle was the boulder field carpeted in a colony of waving anemone. We floated slowly on top of it for several minutes watching the spaghetti straw tentacles get tussled this way and that with the currents. Among the anemone was a new kind of nemo fish for Adam and I – the pink anemone fish. Similar to his orange Andaman sea counterparts, the pink anemone fish was incredibly curious and would poke out from within the anemones to see what was going on.

Apparently whale sharks can be spotted here, though a spotting would not be in the cards for us this day despite being the start of whale shark season. Still there were plenty of diversions to keep us all happy. Throughout the dive we would see loads of angel fish, soldier fish and butterfly fish as well as a handful of other medium and large sized potato groupers. After hearing about Koh Tao’s choicest dive sites – Southwest Pinnacle, Chumphon Pinnacle and Sail Rock – I was surprised with how much I enjoyed diving Shark Island. Sitting just off the southeastern coast of Koh Tao, Shark Island offers a truly diverse backdrop from start to finish, from big boulders to florescent orange, purple and green christmas tree worm covered walls. It is a shallower dive than Southwest Pinnacle (our max depth for the day was only 18 meters but you can go as deep as 25) and is known for its schools of butterfly fish, moray eels, testy titan triggerfish and the occasional ray.

The gargantuan titan triggerfish were as territorial as ever at Shark Island, at times warding us off by flashing their chompers and swimming a little too close for comfort.

But let’s be honest, Shark Island is the wrong name for this dive site (which it’s so called after the shark fin looking rock formation protruding from the water). If I had my choice, I would call it Bat Fish Island in honor of these slender friends who troll its waters. Unlike the bat fish of the Similan Islands though, these bat fish were much larger with darker coloration. They also seemed to prefer to wander alone rather than in packs like we had seen before.

Lots of fish were hiding from us at Shark Island as well. This spotted eagle ray sleeping beneath a narrow channel between the boulders made him hard to get to. And can you spot the puffer fish hiding beneath a coral which we found so strange after the friendly pufferfish we encountered at Koh Haa.

We thought these spotted nudibranches were quite cool too.

We were back to the New Way office by 12pm to wash our gear and plan for our next day of dives. Stay tuned for a recount of some of our other Koh Tao diving adventures at Sail Rock, Chumphon Pinnacle and our UV Night Dive. As the dive mecca of Southeast Asia, there truly is a dive shop here for everyone so it really comes down to finding a place that fits your style and personality. We tend to gravitate towards the small and medium sized, low-key shops and were immediately impressed with the friendliness and family-feel of New Way Diving. They have instructors from around the world including Brazil, England, Switzerland and United States.

While our drive group of five, plus our dive master Sam, were all enjoying a day of fun dives, many of the others on the boat were pursing certifications of one kind or another, whether it be their dive master training or open water or advanced open water certificates. New Way Diving sets themselves apart from the other dive shops in Koh Tao but focusing on smaller class instruction groups and emphasizing the fun science behind scuba. What: Koh Tao dive site Southwest Pinnacle is an underwater playground of massive anemone covered pinnacles, the tallest measuring 8 meters below the ocean’s surface. Here you can typically see shoals of fusiliers and if you are lucky a barracuda vortex. Our day at Southwest Pinnacle was paired with a dive at Shark Island which offers a diverse topography and array of marine life from start to finish.

Where: You can reach Southwest Pinnacle by 45-minute boat ride from Koh Tao in the Gulf of Thailand. Koh Tao has earned itself a reputation for some of the cheapest scuba certifications in the world making it a Southeast Asia scuba diving mecca.

When: Koh Tao offers year round diving but March and April are best for whale shark sightings and July, August and September are best for visibility.

Cost: Fun dives at New Way Diving start at 900 Baht (US$25.50) including equipment but the more you dive the cheaper it gets.

Our day of fun diving at Southwest Pinnacle and Shark Island was provided by New Way Diving (+66 077 456 528, info@newwaydiving.com, www.newwaydiving.com). If you are fun diving ask for Sam as a dive master. As always no matter who is footing the bill, the opinions on Bold Travel remain our own!