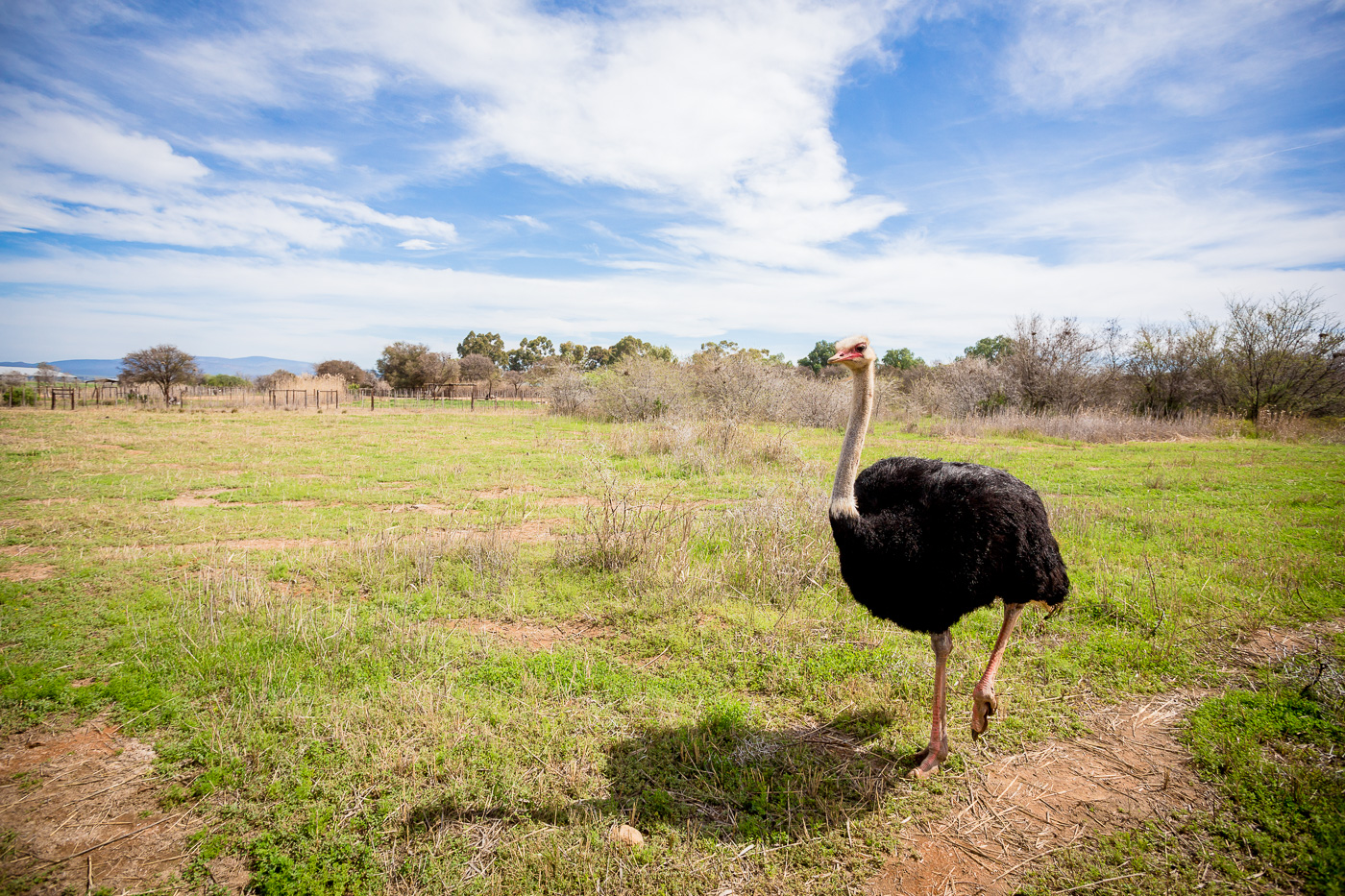 Too many thoughts were running through my head as the jockeys grabbed my arms and guided me up onto the rump of the world’s largest bird. The only one I can remember now though was, “Whatever you do, don’t let go!”

My wacky ostrich ride was the culmination of our hour-long tour at Safari Ostrich Farm in the ostrich feather capital of the world, Oudtshoorn, South Africa. I would venture to bet this is one of the few places in the world where over the course of 60-minutes you can learn all about the world’s largest flightless bird, feed ostriches from the palm of your hand, fan yourself with ostrich feathers, stand atop ostrich eggs, eat ostrich steaks, make bets on an ostrich race and ride ostriches all in the same place. Though my ostrich ride lasted all of 15 seconds, it was an experience I’ll never forget and one I am glad I didn’t pass up while visiting an Oudtshoorn ostrich farm on our South Africa road trip to the Garden Route. A Walk Through An Oudtshoorn Ostrich Farm

Truth be told, we knew very little about ostriches prior to visiting Safari Ostrich Farm. In fact, I had never really seen or observed an ostrich up close so it was fascinating to get an intimate look at these odd birds and learn a bit about their anatomy. Our tour was guided by a young, charismatic german biology student who was studying ostriches in South Africa for the season. Since we were visiting during the winter (aka low-tourist) months, we almost had the entire park to ourselves. So after a walk through the incubator room to see where the baby ostriches are hatched (sadly no action during our visit) we stretched out on the spacious seats of the tractor-pulled tram and took a turn around the farm.

First, we drove through a pen of wide-eyed Zimbabwe blue ostriches, who curiously followed alongside our car hoping we would drop some food. Here we had the chance to observe the ostriches in a large open area to see how they lived and nested. Unfortunately they proved more difficult to photograph than Adam had anticipated.

Next we stopped series of different pens to observe the various species of ostrich and emu, from the Kenyan red ostrich to the South African ostrich and rare white ostrich. Our guide explained to us what characteristics they were breeding for and why some species were more appropriate for breeding than others.

While South African ostrich farming was born out of demand from the fashion industry to wear soft, luxurious ostrich feathers [think European Art Nouveau circa 1880 to 1920] today ostrich is largely farmed for its lean meat. Many other parts of the ostrich are used as well including the skin which is a popular texture for jackets, shoes and purses.

Ostrich eggs, the largest of any living bird, are also surprisingly strong and are sometimes used as a canvas for art. To test their resiliency, we even stood on top of a pile of ostrich eggs (Adam hoisting me on his back and putting all of his weight on one leg). The ostrich shifted only slightly with the addition of my weight onto his back. There was a bag covering his head, I suspect so he couldn’t figure out what was going on and decide he didn’t want me on top of him anymore. My legs fit surprisingly comfortably under his plush feathery wings. The jockeys placed my hands firmly on his shoulder blades, reminded me to lean back as much as possible and not let go.

Then, before I could prepare myself and before Adam could ready the camera fully, the bag was pulled off of the ostrich’s head. The two jockeys on either side of me started whooping and hooting at the top of their lungs as the startled ostrich lunged forward and took his first great strides. We had already been told what fast runners ostriches are, reaching speeds of up to 70 kilometers (43 miles) per hour. Their two toes on each foot, resembling more of a hoof than a bird’s leg, aid in the speed of their gait. Luckily for me, I don’t believe the ostrich was feeling up to running at super speeds today. But he did sprint fast enough to keep the jockeys running to catch up behind us. I couldn’t help but giggle the entire ride, more at the jockeys than the bird, for the loud indescribable noises they were making.

After a turn about the pen, the jockeys calmly pulled the ostrich to a stop. My ride was over all too quickly as the ostrich happily let me step down from off of his back to make room for another rider.

If an ostrich ride sounds intriguing to you, there are several ostrich parks in Oudtshoorn offering tours and ride packages. Know that you have to be under a certain weight limit (I believe 140 lbs) if you would like to ride. What: If you are passing through the Klein Karoo, ostrich feather capital of the world, you can’t leave without a visit to one of the Oudtshoorn ostrich farms. We visited Safari Ostrich Farm and were really happy with our hour of education and fun. I mean, where else in the world can you feed, pet, pose, ride then eat ostrich? Don’t pass at the chance to ride an ostrich as well. But wear longer pants and close-toed shoes.

Where: Most of the ostrich farms are located a few kilometers outside of Oudtshoorn in South Africa’s Klein Karoo.

When: You can visit the ostrich parks in Oudtshoorn year round, bearing in mind that it can get very cold on winter evenings and hot during the summer. Tours can be pre-booked or booked at time of arrival. Tours at Safari Ostrich Farm commence every hour on the hour between 8am and 4pm.

How: Oudtshoorn is easily accessible by road from the Eastern and Western Cape; from Cape Town travel along either the N2 or Route 62. From Port Elizabeth go down the Langkloof Valley past Uniondale until you find the Oudtshoorn turn-off on your right. Follow the signs for Safari Ostrich Park on all of the main roads.