A Tour of Istanbul by Bike 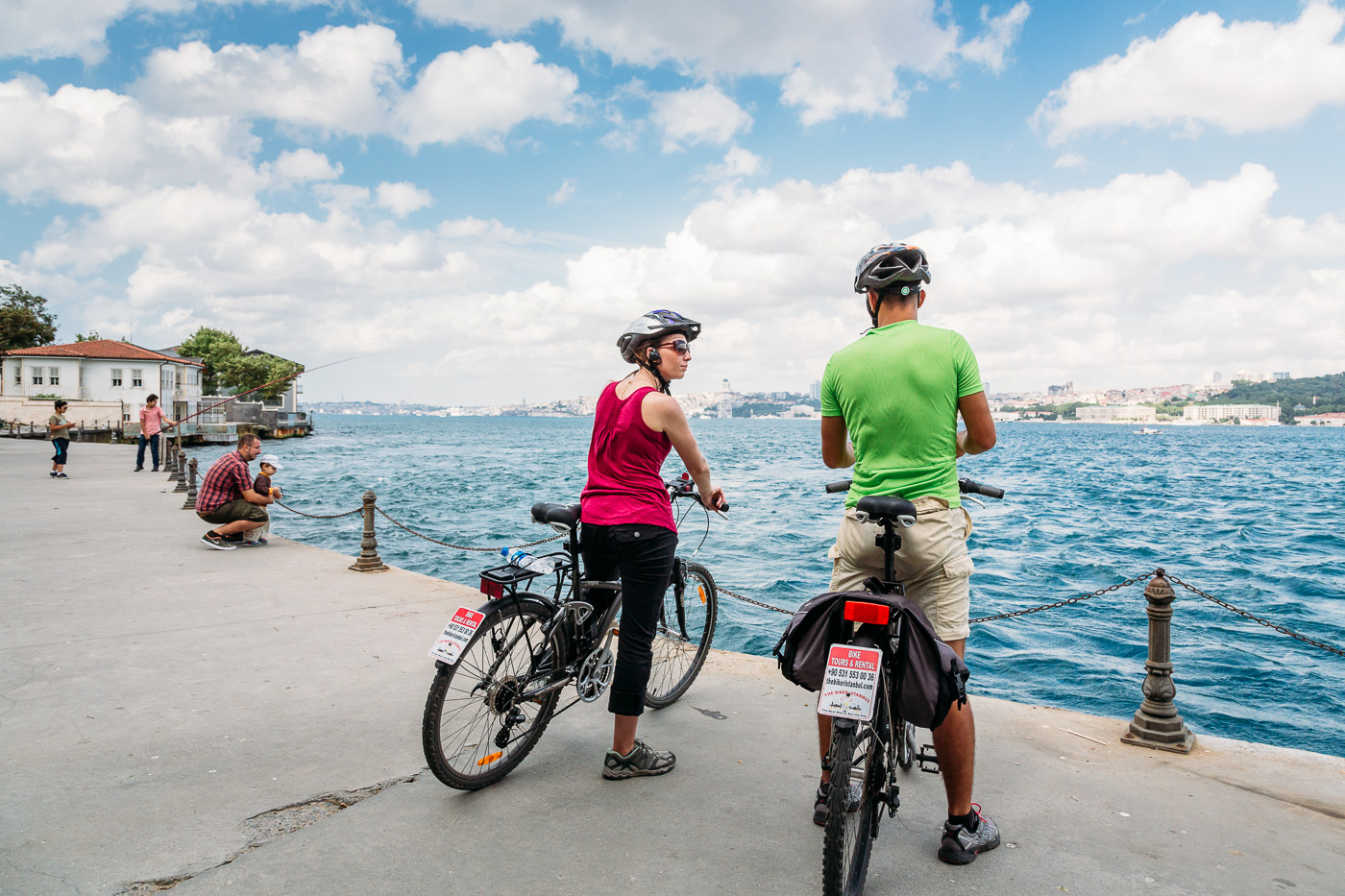 Exploring Istanbul by bicycle may not be the first activity that comes to mind when your plane touches down in this chaotic City of Seven Hills.  Ask any local cyclist and they will most assuredly admit Istanbul is not a bike friendly city… that is yet anyway. Combine the lack of dedicated bike lanes with the hoards of people and congested streets at all times of day and it makes travel on two wheels quite an adventure.

However Bold Travel found its recent full-day bike tour with The Biker Istanbul to be the perfect way to venture to lesser touristed regions and get a deeper feel for the rich history and culture of this vibrant, multi-faceted city. “We’ve got to pedal a little faster,” urged Aytaç over the headset hanging on my left ear.

The distance between us and the riders of the Transcontinental Ride was widening on the steep ascent to the entrance of the Bosphorus Bridge. My quads burned as I tried to dig deeper and get myself and my bike up the seemingly never ending hill.

Our guide Aytaç (pronounced i-touch) was noticeably excited this morning as we strolled up to The Biker Istanbul offices. The night before he had learned about a very rare opportunity to bike over the Bosphorus Bridge connecting the European and Asian sides of Istanbul. Normally closed to bikers and pedestrians, we lucked out as today was a special occasion with the Transcontinental Riders finishing their long journey from Muur van Geraardsbergen in Belgium. Aytaç wanted to make sure we had the chance to participate and so added this as a part of our Golden Horn and Historical Peninsula biking tour!

The pain was all worth it once we cruised over the peak of the hill and started our ride across the 1,560 m (5,118 ft) long bridge. Dodging strong winds and double decker buses, we caught up with the rest of the riders to be flanked to our front, side and rear by police escorts. Riding now with ease we could take in the stunning view of the two continents of Istanbul. We even got to connect with Rae, an awesomely strong and inspiring round-the-world biker.  Check out her blog at Boat Girl’s Bike Trip. And so we began our day-long bike tour exploring the Asian side of Istanbul.

Here along the Asian shoreline, the chaos of the streets only minutes prior faded away behind us as we rode carelessly along well manicured parks of family picnics and casual fishermen. Once again crossing the Bosphorus river, this time via ferry and the Galata bridge, we arrived at the city’s Historical Peninsula. The bulbous domes and slender minarets of the Hagia Sophia and Blue Mosque stand out prominently on the skyline.

As the epicenter of ancient Istanbul for four different empires, the Historical Peninsula is expectedly chock-full of history and sites to explore.  Our morning escaped quickly as Aytaç wound us expertly through the crowds of the Sultanahmet area, stopping regularly beneath the shade of a tree to serve up historical tidbits of information about the Egyptian Obelisk, Hippodrome, Topkapi Palace, Gulhane Park, Basilica Cistern and on and on. A World Away in Süleymaniye

Continuing on, we climbed the Third Hill of Istanbul to arrive at the beautiful Süleymaniye mosque. One of my favorite spots in Istanbul, Süleymaniye exudes an air of elegance and tranquility we had not experienced in the other mosque-museums we visited while in Istanbul. Here we took time to admire the grand columned courtyards and perfectly placed Iznik tiles. We listened in with small groups as the guides explained the fundamentals of the Islamic religion. We wandered the well-manicured lawns and enjoyed the birds eye view of the city below us. On our lunch stop for delicious kuru fasulye (beans in a red sauce with onions) and ayran (savory yogurt drink) at a small locals only restaurant behind Süleymaniye we got into a discussion with Aytaç about the ongoing Turkish-PKK conflict and the practice of Islam.

Then we started to make our way through the lesser touristed neighborhoods of Kumkapi and Faith. Though far less glamorous than the neighborhoods we had already left behind, there was a feeling of the real Istanbul lingering in the streets and along the back alleys where children kicked around soccer balls and men played backgammon and sipped their Turkish tea.  And we were getting to witness it because we were exploring further and deeper on bike. Next we stopped at the brilliant Kariye Museum and, after splurging on the Museum Pass Istanbul for 85 TL, admired the shiny gold Byzantine-era mosaics and frescoes recently unearthed after secularization.

We pedaled further and further towards the city wall, stopping at the Valens Aqueduct, Fener Orthodox High School, Vlaherna Church of the St. Mary the Virgin, Greek Orthodox Patriarchate. The worlds of old mixed with the world of new as Aytaç helped us understand the movement of different cultures, religions and empires through these neighborhoods. Finally we reached the great wall of Constantinople to see where the city fell from Roman rule to the Ottomans in 1453. A Final Ride Along the Sea

The smell of sea and the diving of seagulls greeted us as we made our final long ride from the wall of Constantine on the Golden Horn back to our starting point in Eminönü quarter.  As we maneuvered from sidewalk to street and back again pedestrians seemed more confused by the “ding, ding” of our bells while cars politely and safely made way for us.

Back at The Biker Istanbul offices, owner Sean was eager to learn how our ride went.  We excitedly told him about the miles and miles of ground we had covered that day and all of the sites we had seen. But boy was Istanbul not a bike friendly city!

“Not yet!” was his response. Turns out Istanbul has plans in the works to expand its bike lane network to 1,000 kilometers (620 miles) by 2023. If you ask us, exploring Istanbul by bike is far more adventurous without the lanes, so best to visit now!

Tour of Istanbul by Bike Essentials

The Golden Horn and Historical Peninsula tour was provided by The Biker Istanbul (+ 90 212 511 55 56, thebikeristanbul.com). Half-day and full-day tours are available and include bike hire, helmet, headset, guide, drinks and snacks/lunch.