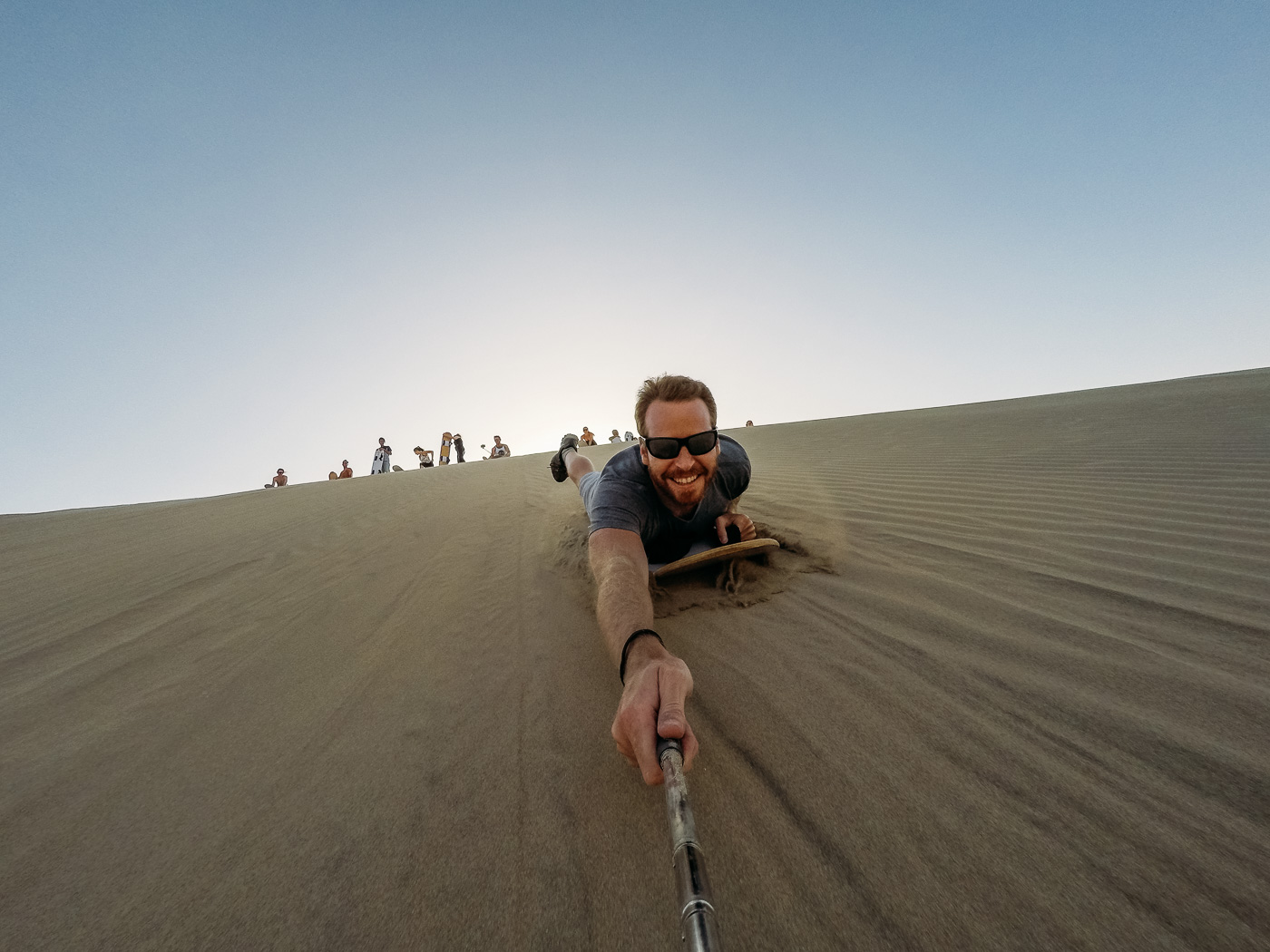 There was a moment when I thought to myself, “Well this is a bad idea.”

It was a fleeting moment of course, after which I threw caution to the wind, latched my arms under the cloth straps of the sand board and hurtled myself face first down the steep slope of one of Huacachina’s highest sand dunes. My speed picked up quickly as I glided faster and faster down the dune, occasional bursts of sand blowing into my face and hair until I slid to a gradual stop at its base.

Dune buggying and sand boarding were the reason we had made a two-day side trip to Huacachina, a small desert oasis outside of Ica, Peru. And the adrenaline rush was well worth the extra effort. A LUSH LAKE IN A SEA OF SAND

Known as the Oasis of America, Huacachina is one of the only true desert oases in South America. This palm lined watering hole lies in dramatic contrast to its barren sandy surroundings, making it quite a bizarre sight to behold. This supporting town of less than 200 residents has been drawing tourists for more than 70 years due to its dramatic landscape and extreme sports offerings. A little worn around the edges, the Huacachina of today caters mainly to backpackers looking for a quick thrill before moving on to their main destination in Peru. From sand boards to dune buggies and 4x4s, Huacachina is one of the best places to get your thrills on in Peru. Far exceeding my expectations, Huacachina has perfected its two hour offering of dune buggying plus sand boarding as the sun sets over the desert.

Our afternoon’s excursion started out innocently enough. We buckled ourselves into the 10 seat neon-colored dune buggy outside Banana’s Adventure. Our driver, Pablo, was in a particularly tired mood and admitted he wasn’t feeling well. After stalling the engine several times he slowly drove us around the town to the start of the dunes. We shot each other a worried glance – what were we getting ourselves into?

Luckily Pablo had a pretty young lady sitting next to him who he seemed compelled to try impress. So after ramping up the first hill, we laid his foot down on the gas and accelerated towards the tallest dune he could find. The pit of my stomach dropped as we edged over the top of the dune straight down the vertical sand wall on the other side.

This went on and on. The more we screamed, the sharper he seemed to take the turns and the higher he seemed to make the jumps. For 25 more minutes we raged our way around the vast nothingness of the dunes until our mouths were dry from screaming so much. This was way better than the tame ride we were expecting at the start. Next, Pablo parked the car at the top of a hill and pulled a handful of boards out from the back of the buggy. He instructed us to wax the bottom of the boards while demonstrating how to strap ourselves in. Adam and a few others braved the hill first, trying to ride the boards standing up snowboard-style. With some success they made their way down the hill. But it was those of us who faced the dune belly down and face first that I think had the most fun. We could control our speed by how much we dug our feet into the sand behind us. With each new hill I got braver and braver, using my legs less and letting the board lead me straight down the hill. The first five seconds of every hill were like the top of a roller coaster.

After every ride down, we’d climb our way to the top of the next hill over and over again until we reached the mac daddy of the dunes. As we paused to observe the enormity of the slope below, Pablo shouted a friendly “don’t die” (suggesting to me perhaps a few accidents had happened here at some point). Adam went first, selfie stick in hand, and with great speed made it to the rough plateau below. It took some self-talk before I mustered the courage to follow. I made it down in one piece without crashing the board or losing my sun glasses so I count my final ride as a win. By this point the sun had started to set over the dunned horizon so we made our way back via buggy to the start of the park where we watched Huacachina fall into darkness for another day. The next morning, just for fun, we climbed our way to the top of the nearest dune. A thick haze was hanging over Huacachina making visibility limited. We played around on top of the dunes for a while before enjoying a run straight down the vertical of the dune.