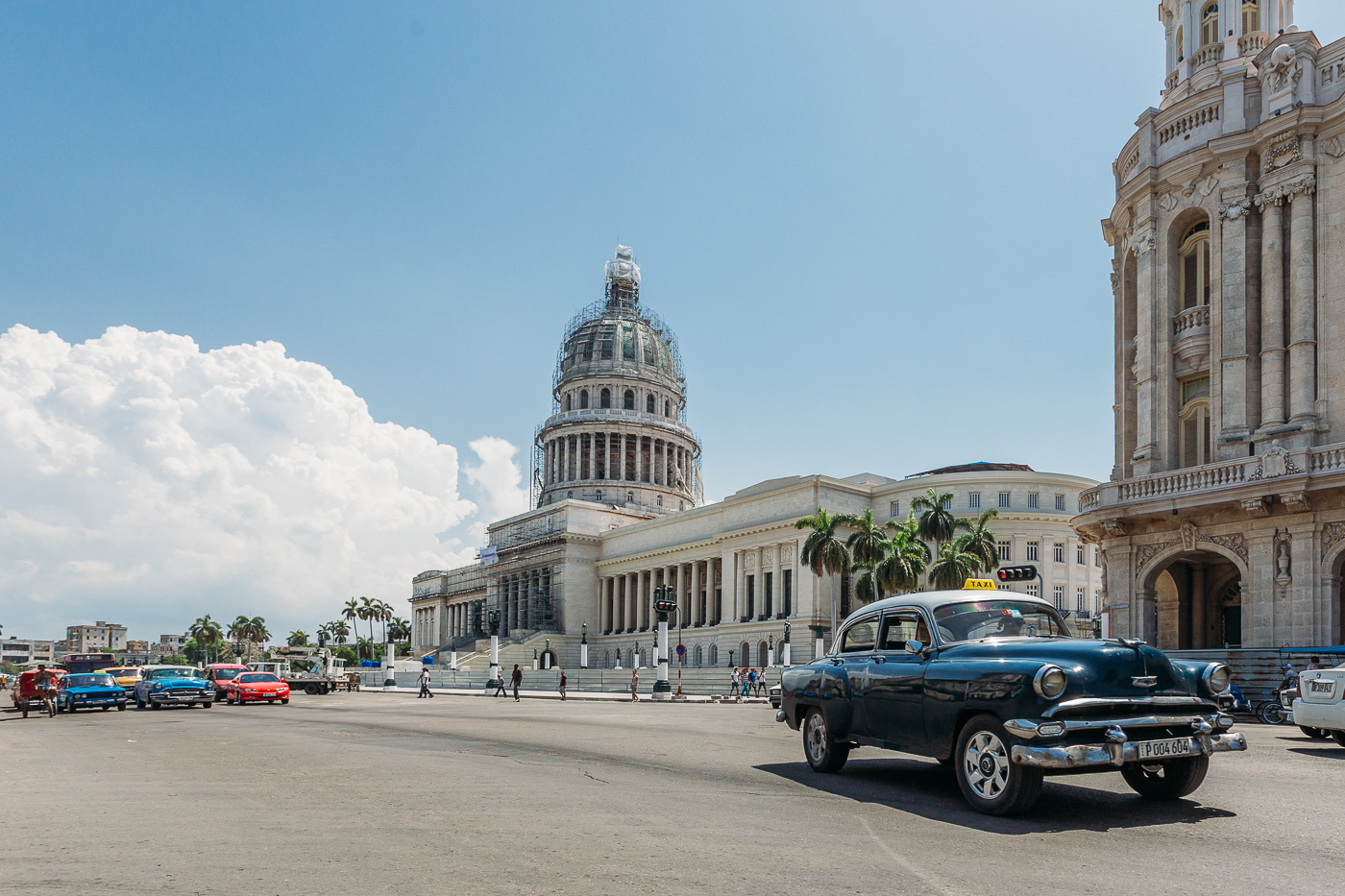 While I wouldn’t normally consider wandering around a city on a self-guided tour an adventure, Havana certainly was.  So much so we were exhausted after only 3 days in the UNESCO World Heritage city.  Between the heat, the hustle and the long-distance walks, we were glad to get a respite in tobacco country and on the beach.

Over three full days, we focused our time on three neighborhoods – Habana Vieja, the Malecon, and Vedado – and probably could have spent a bit more time exploring if we’d had the energy. The majority of our time was spent in Habana Vieja and the surrounds.

Habana Vieja is home to the original colonial city, founded by the Spanish in 1519, as well as the central park and capitol where Cuba’s government used to be based pre-revolution. The city became a stopping point for the treasure laden Spanish ships crossing between the New World and Old Worlds. In the 17th century it was one of the main ship-building centers. The city is abundant with beautiful colonial mansions built in baroque and neoclassic style, many now showing their age after not being kept-up.

The grand Capitolo Nacional, dominating the central park landscape, looks eerily similar to Washington D.C.’s house of congress.  It was under construction during our visit but supposedly is being restored to house Cuba’s National Assembly. Havana’s Malecon, or boardwalk, stretches five miles across the northern side of the city uniting Havana’s various neighborhoods. It’s a popular hangout amongst fisherman, lovers and musicians. As the modern heart of Havana, Vedado was a great neighborhood for us to be based from.  It felt more grounded in the real Cuba, bustling with locals doing everything except working (a seemingly common trend in Cuba).

While there are not a lot of attractions to see in Vedado, apart from Plaza de la Revolución, there are a handful of (relatively) decent restaurants and many casa particulares like Casa de Jorge Coalla Potts where we stayed.  It is also home to Cuba’s favorite ice cream parlor, Coppelia, which had a line of locals literally around the block every time we walked past.

Plaza de la Revolución was a trip – mostly because it felt like a cold, oppressive representation of the communist government running Cuba today.  Here sits the José Martí Memorial, a 358 foot tower of marble, commemorating one of Cuba’s most revered revolutionaries.  Ironically it was built pre-revolution by the Batista government. It is from here that Fidel Castro has given speeches addressing more than one-million Cubans.

Across the square, the famous Che Guevara sign takes over the side of the utilitarian Ministerio del Interior, reading Hasta la Victoria Siempre (Always Towards Victory).

Havana wouldn’t have been half as exhausting were it not for its street hustlers.  Hustlers for taxis, hustlers for food, hustlers for tours and knickknacks.  The only hustlers we would have appreciated bumping into were cold water hustlers and those didn’t seem to exist.

The tricky thing is you can’t blame Cubans for wanting to make an extra buck on the streets when their dirt-poor national wages barely keep them afloat.  In fact, we quite admired those who were entrepreneurial enough to try to make a bit more income for themselves.  Plus Cubans might be one of the friendliest bunches of people we have ever met.  It was just darn frustrating having to say, “No, gracias” every 30 seconds.